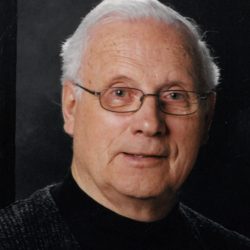 With sadness we announce the passing of a beloved husband, father and grandfather. Abe passed away at St. Paul’s Hospital.  He was 90 years of age. Abe was born west of Hague, SK, near the village of Hochfeld to Abram and Maria (Klassen) Wall.  He had 5 brothers and 6 sisters.  He attended Paschendale public school and later attended a Christian boarding school for grades 9 & 10. Abe loved music and sang in choirs and played the guitar. Abe was very involved in his church community, teaching Sunday School, choir, special music, deacon and worship leader.  Prayer was a part of his daily life. Abe moved to Saskatoon in 1954 and was employed by Sterling Distributors and later Federated Co-op – Abe was a sales rep. In 1955, he was married to Rosella Teichroeb and they celebrated 66 years of marriage in April. They had 4 children- 2 boys and 2 girls. Abe was predeceased by his parents, Abe and Maria Wall; Son Kenneth; Daughter Sheryl; Son in Law Walter; Sisters: Ann, Helen and Sarah; Brothers: Henry, David and Jacob. He is survived by his Loving Wife Rosella; Children: Terri Mooney & Jamie (Kim) Wall; Grandchildren: Daniel, Erin, Marygrace and Conor; Sisters: Martha, Leona, and Olga; Brothers: John and Bill (Kathy); Sisters in law: Ann Wall, Marilyn Wall, Elsie Michayluk and Esther Evans; Brothers in law: Pete (Marj) Teichroeb, Lou (Sonja) Teichroeb, as well as nieces, nephews and many friends. Celebration of Life Service will be held on Saturday, October 9, 2021 at 1:30 p.m. at Cornerstone Church, 315 Lenore Drive, Saskatoon.