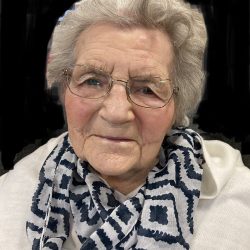 She was predeceased by her husband, Peter Elenko, in 1993; her parents Andrew and Alexandra Nesdole, her brother James (Alice), Nesdole, sister Lillian (John) Smith, sister Evelyn (Nick), Kostyniuk, and younger sister Eva (John) Benson and infant brother George, as well as all her husband’s brothers and sisters and 7 nieces and nephews.

Agnes was born and raised in the Blaine Lake area and attended Harmonia School until Grade 9. She was raised in the Russian Baptist Church in Blaine Lake where she learned of and accepted her Lord and Saviour and was baptized.  Here was also where she married Peter Elenko of the Lizard Lake area on Christmas Day, 1943. They farmed on the original Elenko homestead until Peters passing, raising Hereford cattle, and growing grain. She milked many cows, selling cream and butter, raised many chickens, turkeys, ducks, and geese to feed the family and for sale, and sold many eggs as well. They were active members of the Lizard Lake Baptist church and was the last surviving member. She was also very supportive of the Cando 4H Beef club that her children were involved in. Agnes was known and remembered by all for her wonderful meals and baking. Her middle name was Hospitality. Every Sunday there would be a full dinner and company at the table.  She enjoyed hosting and feeding her large extended family and friends from the area, who often came to call, and sometimes the odd stranger who wandered in from the neighbouring highway. Her homemade bread and buns and would have been prize winners in any competition and are something her children and grandchildren will always remember and long for!

She was extremely artistic and an expert seamstress, designing and sewing all her own and her daughters’ clothes as well as for many others. If a pattern could not be found she would design and create one! She sewed many bridesmaids’ dresses and figure skating outfits! Her embroidery was exquisite.  She made many expertly crafted crocheted tablecloths and doilies and Afghans as well as knitted many sweaters, mitts, toques, socks, and shawls. She was also musical, playing the piano and organ at church and also played the mandolin. She made numerous trips to visit her sister who lived in the United States and then they would travel further together.

After Peter’s passing, she remained on the farm for 23 more years and continued to grow a large vegetable garden and lovely flowers! She travelled to many resorts or enjoyed cruises and bus tours and even travelled on her own to Europe to visit one of those ‘strangers’ who pulled in from the highway and became a friend!  She continued to help her son, running errands, and driving for parts as he continued to farm until she was 88! She became an active member of the local community ladies’ group and sewed and quilted many quilts with them over the years, raising money for charity. She then moved to the Sunshine Care home in Biggar for 3 years and in 2019 she moved to the Biggar Long Term Care Home.

Interment will follow at Woodlawn Cemetery in Saskatoon at 2:30 p.m.