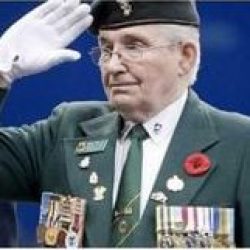 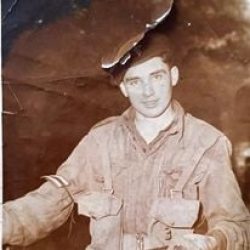 It is with heavy hearts that we announce the peaceful passing of our father, Alfred Gerard (Gerry Tait) on December 9 at the Sherbrooke Veterans Village, Saskatoon. Left to cherish his memory are, his children Sheena (Dean) Rowan, Jim (Helen) Tait, Andy Tait and his adored grandchildren, great grandchildren and a great great grandson, and his very dear friend Alice Muise. Gerry was predeceased by his grandson Shawn Amendt, his wife Jean (Sheena), his daughter Elizabeth, and his special friend Rene Anderson.

A celebration of Dad’s life will take place with family and a few very close friends (due to COVID regulations) on Wednesday, December 16, 11 am at Cherished Memories in Martensville. We hope that dear friends that cannot attend will take the opportunity to watch the celebration from their homes as it will be livestreamed.

Dad was born and raised in Ayr, Scotland. The youngest of 5 children, he joined the British Army as soon as he turned 18.  From 1949-1961 Dad spent time serving overseas in Korea, Japan, Germany, and the Mediterranean. When he returned home from serving in the Korea War he met our beautiful mother and they were soon married and started their family. In 1967, Dad moved his family to Canada, first to Toronto, then Lanigan, and finally settling in Saskatoon in 1971.

Dad was a very hard worker and a welder by trade working in shipyards in Scotland and England, and potash and coal mines in Canada. For several years he was the Canadian District manager of an American mine tool company before starting up his own company. His work took him to many destinations across Canada and the United States allowing him and Mom the opportunity to travel often.

He was community minded and he served on several Boards over the years including the Sherbrooke Community Centre and the Canadian Welding Bureau. He was president of the Royal Canadian Legion Branch #362 for eight years, and at the time of his passing he was President of the Korea Veterans Association.

Gerry loved his home country and visited Scotland often. Everywhere Dad went, he made friends, he made people laugh, and no one could forget his smile. He knew how fortunate he was to have so many great friends in his community, at the service clubs, and at the Legion Manor where he had resided for several years.

For the past few years he had enjoyed living with his daughter and son-in-law Sheena and Dean in Martensville. In September 2020 Dad moved into Sherbrooke Community Centre, Veterans Village. Dad’s health and spirit deteriorated greatly this last year. We would like to thank Dr. Matthew Wong and the wonderful ladies at the Medicine Shoppe in Martensville who always treated him with the utmost respect. A massive thank you to the staff and caregivers at the Sherbrooke Community Centre who went over and above every day to try and make Dad comfortable. God Bless all of you.

‘Take these broken wings and learn to fly – all your life, you were only waiting for this moment to arise

There will be a small celebration of life service for Alfred on Wednesday, December 16, 2020 at 11 a.m. The service will be live-streamed for those that wish to attend virtually at https://distantlink.com/cherishedmemories.html