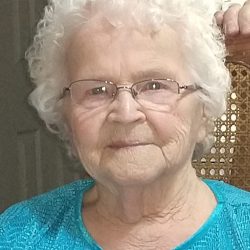 With heartfelt sadness we announce the passing of Alma H. Dueck, at the age of 93 years, of Warman, passed from this life on October 23, 2021, at St. Paul’s Hospital, Saskatoon.

She was born on May 16, 1928, near Warman, Saskatchewan, a daughter of the late Henry and Anna Doell. On November 19, 1950, she married William (Bill) Dueck, who survives her.  Alma’s passing ended their marriage of almost 71 years.

For many years, Alma worked alongside of her husband Bill, and they ran a successful service station in Dalmeny.  She also worked at the Dalmeny Shop Rite and Dalmeny Drug Store for many years.  Initially, they did not believe they would have any children of their own and after several years of marriage they were blessed with three boys, roughly spaced apart by two years.  Alma was a kind and compassionate person who loved her family dearly and if she can be accused of anything it would be that she was too good to them.  She enjoyed entertaining in her home and was gifted with hospitality.  She loved cooking and baking and sharing with those who entered her home.

Alma accepted Jesus Christ as her Lord and Saviour as a young adult and for many years attended Dalmeny Bible Church with her family.  At the time of her death, she attended the Bergthaler Mennonite Church in Warman where she was a member.

Due to safety concerns, funeral services will be live streamed Saturday, October 30, 2021, at 2:00 p.m.
Arrangements are entrusted to Martens Warman Funeral Home. Interment will take place in the Dalmeny Bible Church Cemetery.
The livestream link is available at: https://www.faithproductions.ca/livestreams
In lieu of flowers, donations in Alma’s memory can be made to the The Gideons International in Canada, 501 Imperial Road North, Guelph, Ontario N1H 7A2 or the Bergthaler Mennonite Church, 206 2 St, Warman, Sask. S0K 4S0