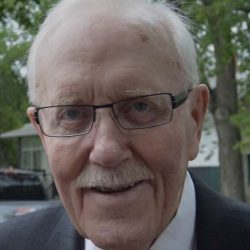 Alton Clemens Barsness slipped peacefully into the presence of his Lord and Saviour, Jesus Christ, at 7 p.m. on Wednesday evening, May 4th, at the age of 91.

Alton was born on October 25, 1930, in Frontier, Saskatchewan and attended South Trail school.  He then studied at International Bible College where he met Janet Estelle Ellingson and married her on April 10, 1952.

God blessed them with Carol Elaine, Berva Ann and Duane Neil. Alton and Janet were married for eleven years when Janet passed away in 1963. As a widower, Alton raised his children on the farm and was very grateful to Noreen Biem and Adora Nestegard for their loving care of the children.

Alton served with the Gideons International in Canada (now called ShareWord Global) for 50 years. During this time, he served as director for the three prairie provinces. Alton also served in the local church as Sunday school superintendent. As well, he served as a board member of Valley View Bible Camp and president of the IBC Student Association. Alt had a passion for global missions through prayer, financial support, and extensive travel.

God gifted Alt with a wonderful tenor voice with which to praise Him. He blessed many with his music ministry of solos, duets, and quartets.

Alt enjoyed a great sense of humour, valued many special friendships, had a strong commitment to the local church and he also enjoyed sports both as a participant and as a spectator. And now in his later years, he loved playing pool and crokinole.

Following 15 years as a widower, Alton met and married Jean Reimer and adopted her two children, Glen and Betts.

Alton is survived by Jean, his wife of 43 years, his children Carol, Berva, Duane, Glen and Betts, his sisters-in-law Pat and Betty, his brother-in-law Glen (Lorraine), his eleven grandchildren, and his 13 great grandchildren.  He was loved by many nephews and nieces.

Alton suffered with Parkinson’s disease, spending the last four and half years in long term care. We are very grateful for the special medical care of Dr. Aaron Friggstad and the loving attention of the nursing staff at Circle Drive Special Care Home. In lieu of flowers, donations may be given to ShareWord Global (Gideons).