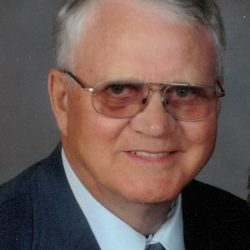 Alvin passed away peacefully on March 28th at 1:00 a.m. with his wife Denise, daughter Susan and stepdaughter Brenda by his side.

Alvin was predeceased by his parents Clifford and Helen Branning, his sister Mildred (Millie) and her husband Vic Menard, his oldest daughter Sandra Blythe and his stepdaughter Debbie Foley (Griffiths).

Alvin was born in Weyburn, Saskatchewan and spent his childhood growing up on the family farms in Ontario and Saskatchewan. He was raised by two loving and supportive parents. He stayed in Weyburn for many years, during which he worked at the airport, the Department of Highways and the Ford Garage where he was the service manager.

In 1965 he moved from his home and family to Thompson, Manitoba. He was hired by INCO and spent the next 26 years in Thompson working and also buying homes to fix up and resell.

He met his wife Denise in Thompson and they spent many hours going to garage sales, checking out other peoples’ treasures, only to make them theirs. Their children and grandchildren have benefitted from the treasures they purchased.

Alvin retired from INCO in 1991 and he and Denise moved to an acreage outside of Prince Albert, Saskatchewan, making that their home until 2002. During their time spent near Prince Albert, they became Snowbirds, starting their yearly journeys in 1991 and continuing until 2010 when Alvin turned 80. They travelled south to Mesa, Arizona, every October and stayed until March. They loved going south to avoid the brutal Saskatchewan winters and relished their time in the hot climate. Alvin became the fixer/helper while in Mesa, where he would help people fix their plumbing issues, re-shingle their roofs and help in any way that he could. He continued to help until he was no longer physically able.

Alvin and Denise were very active in Mesa and became involved in many activities. Alvin played shuffleboard, they went hiking and of course garage-saling, their favorite pastime.

In 2002 they relocated to Osler, Saskatchewan, settling into their new community. They stayed in Osler until December 2019, when they decided it was time to sell and move to the Diamond House in Warman, Saskatchewan.

Alvin was an avid hunter and fisherman who loved the outdoors. He spent many hour ski-dooing, which he also loved. Alvin was mechanically inclined and enjoyed fixing his vehicles and loved to tinker and fix other things, such as watches, clocks and shavers. He and Denise grew large, productive gardens and would share their harvests with their families. For many years he was seldom seen without his dog Bubbles.

Alvin was a loving family man and will be dearly missed by all who knew him.

In lieu of flowers, memorial donations can be made to the charity of your choice.

Due to the recent limitations of social gatherings, a celebration of life will be held for Alvin at a future date.