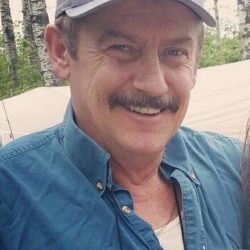 On Wednesday, June 2, 2021, Ambrose James Dyck, passed away at home in Saskatoon, Saskatchewan, at the age of 58, after a long struggle with his health.

Ambrose was born on June 14, 1962, in Saskatoon, Saskatchewan, and later moved to Aberdeen, Saskatchewan with his family. Although he spent the majority of his life between Saskatoon and Aberdeen, his work took him many different places across both Canada and the U.S. throughout his life. He was a Red Seal Journeyman Millwright, and a Truck Driver, but as a jack-of-all-trades, he could do almost any job and do it well.

Ambrose had a passion for fishing and camping (and watching the “gube tube”), but his greatest love was for his family and friends. While he might have been the most stubborn man to have ever existed on this earth, anyone he loved knew that he was a kind, understanding, and compassionate man and was always willing to help family or friends in need. The absence of his unconditional love will be felt deeply by many, but the memory of his handsome grin, bright blue eyes, and playful (usually inappropriate) sense of humour will live on.

Ambrose was a loving son predeceased by his mother, Yvonne Dyck, and his father, Peter Dyck. He was a proud father and is survived by his three children, Jamie Yvonne Dyck, Terence James Dyck, and Amber (Matthew) Louise Hardy (Dyck), and six grandchildren, Alister Dyck-Kahle, Lukas Dyck-Kahle, Amelia Dyck, Clodagh Dyck-McNamee, Dominic Hardy, and Madison Hardy. He was a brother, and is survived by his siblings, Howard Dyck, Judy (Marvin) Procyshyn, Wendy Lichtenwald, Tim (Renee) Dyck, Cliff (Tracy) Dyck, Buffy (Henry) Toy, and Jacob Dyck. He was predeceased by his brother-in-law, Bob Lichtenwald. He was also a loving uncle and is survived by many nieces and nephews, cousins, relatives and friends.

As per his request there will not be a viewing or funeral service, and instead a private celebration of life will be held. In lieu of flowers, please send any donations to the Canadian Mental Health Association in Ambrose’s name.