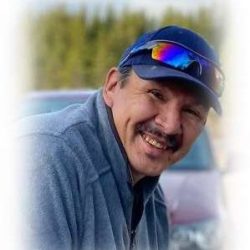 It is with heartfelt sadness that we announce the passing of Bart “Moon Shine” Herman, at the age of 47 years, on November 21, 2022, at Bear Creek, SK.

He was predeceased by his Grandparents Isaac & Sophie and Gertrude & Mathias; Brother Cornelius Herman; Numerous Aunties, Uncles and Cousins.

Wake Services, Funeral Liturgy and Interment dates to be determined.

Martens Warman Funeral Home is honored to be entrusted with the care of Mr. Herman.