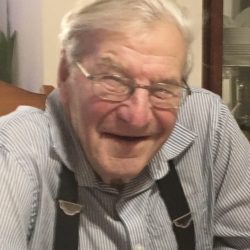 It is with heartfelt sadness that we announce the passing of Bud Harach at the age of 91 years, on Monday, November 1st, 2021.

On, January 11, 1930, Bud was born at home, on the Harach homestead at Redberry. He was one of 20 children. Bud went to school at Zaporozy School. He would walk three miles to school barefoot but would sometimes stop to play hooky by climbing trees and catching magpies. While attending school, he worked on the farm. Bud eventually left the farm to work at MacMillan Bloedel in Port Alberni, BC. While at the mill he lived on a houseboat on the ocean. As part of his working career, he also worked as a ranch man, near Oyen, AB.

In March of 1953 he met the love of his life, Sally, from Great Deer. They soon married on October 17, 1953, at Orlow Ukrainian Catholic Church. Bud and Sally lived in Saskatoon for a short time and eventually settled on the family homestead in Redberry. Bud was a very skilled carpenter and house builder, one of which was the first house ever built on Avenue P in Saskatoon. Much of his pristine woodwork was accomplished with no electricity, using only his hands and the tools he had. Bud and Sally started their family in 1954 when Billy was born. Their family continued to grow with the births of Teresa (1957), Bernedette (1960), Marianne (1963), Christine (1969) and Christopher (1975). While working on the farm, he devoted much of his time to the Hafford Church and Community. Carpenter, firefighter, plumber, painter, electrician, mechanic, welder, inventor and tailor were only a few of the titles that Bud was known by. Anyone who knew him, knew her could fix anything! But his biggest and most important titles were Husband and Father, in which he devoted all his love and time, endlessly. Bud’s hobbies included: hunting, fishing, playing the accordion and guitar, vocalist, woodworking, playing games like Kaiser, Skip-Bo, and Pictionary. Within his passion for music, he recorded a single album of the song “On Top of Old Smokey.” Bud was a very talented and gifted man.

On Monday, November 1, 2021, God called Bud to Heaven, when he passed at his home and birthplace, the homestead at Redberry. A loving husband, father (Tat), Gido, brother, uncle and friend, he is survived by many who loved him dearly. His wife and best friend, Sally, daughters Bernedette (Travis), Marianne (Bill), Christine (Brad), sons Billy (Donna) and Christopher (Sherri), 12 grandchildren (Mike, Lindsay, Tamara, Cassandra, Tyson, Brie, Nicholas, Natalia, Mikayla, Logun, Justin, Natasha), 5 great grandchildren (Noah, Alida, Scarlett, Cooper and Layla) and siblings Jerry (Estellita), Helen, Basil (Lori), Rosie (Henry) and Sylvia (Glen). He is predeceased by his daughter, Teresa, parents (Teklia and Nickolas) and many brothers and sisters. He has touched the lives of so many with his unconditional love, generosity, kindness and gentle heart. He will be forever loved and missed.

Prayers will be held on Friday, November 5, 2021, at 4:00 p.m. and Funeral Service on Saturday, November 6, 2021, at 11:00 a.m. both at Holy Eucharist Ukranian Catholic Church on 2nd Street East, Hafford, SK. with Interment to follow at the Church Cemetery.

If you would like to view the service online, it will be available using this link https://youtu.be/GSJdhX2yr6A