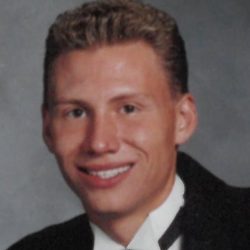 Byron Ens was born June 22, 1978 in Saskatoon, SK. At an early age, Byron’s family moved to Langham, SK where he attended public school.  This is where he met Janet. During high school they became an item; you could not mention one name without including the other. This relationship grew stronger with each passing year and on November 6, 1999 he married his soul mate.

Following high school, Byron started his career in roofing. After learning the trade from his father-in-law, John Bueckert, Byron decided to become self-employed. He was a perfectionist, a hard worker and dedicated to his customers. He carried this passion for many years, then their world was turned upside down. Janet was diagnosed with MS. He managed to split his time between his career and the woman he cared so much for, often working late into the evening. Once Byron became ill, the roles were reversed and Janet would now become his caregiver alongside his mother.

Byron had a love for the outdoors, enjoying many great weekends at the lake fishing with friends and family. He had an appreciation for good food and was a great cook. His infectious smile, laughter and kindness had a way of drawing people to him. Having a big heart, he was able to be tender and caring. As the youngest sibling, Byron was known to be challenging at times, but that was part of his outstanding personality. He was always proud of his older brothers.

A couple of weeks prior to his passing, he had a conversation with his aunt. It was at that time, he brought Jesus back into his heart. There was a notable change in Byron.  He is now in Heaven, with a new body and free of any pain. His eyes are looking at Jesus.

This is our comforting grace knowing that he is living in a place so beautiful, we here on earth cannot fathom. Rest in peace as we know you are.