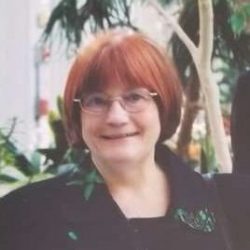 We are saddened to announce the passing of Catherine Isabel King (nee Littlejohn) at the Royal University Hospital in Saskatoon.  Cathy was born in Sherbrooke, Québec and raised in Reaboro then Lindsay, Ontario. She was predeceased by her parents, Erma and Guy Littlejohn, her brother Rob and is survived by her nephew Scott. Cecil King, Cathy’s beloved husband, predeceased her by eight months. Cathy leaves behind and will be fondly remembered by her stepchildren: Daryl (Gladys) of Buzwah, Anna-Leah of Regina, Alanis (Elizabeth) of Ottawa, and Shoo-Shoo (Troy) of Tyendinaga Mohawk Territory; grandchildren and great-grandchildren. Also, many friends and colleagues too numerous to mention.

In her professional life, Cathy was a teacher, writer, and historian.  As a teacher, Cathy was proud to be part of the Northern Teacher Education Program (NORTEP) and the Saskatchewan Urban Native Teacher Education Program (SUNTEP) and enjoyed seeing the successes of her students.  As a writer, Cathy co-authored, The History of the Métis of Willow Bunch (2003), with her dear friend Ron Rivard. In 2004, the book won the Saskatchewan Book Award for Publishing in Education. Cathy’s final manuscript entitled The Métis History of Saskatchewan, also co-authored with Rivard, will be published posthumously.

An avid historian, Cathy spent more than a decade researching and identifying Métis Veterans and, working with the Gabriel Dumont Institute (GDI), combined her research with their family anecdotes in the development of a database to share their stories.  Cathy’s passion led her to chronicle her journey overseas through the United Kingdom, France, Italy and the Netherlands following the path of many Métis soldiers who served in World War II.  Cathy’s fervent efforts to share the contributions and sacrifices of Métis Veterans who served in both World Wars and the Korean War culminated in her book, The Métis Soldiers of Saskatchewan: 1914-1953 (2012), for which GDI received nominations for Saskatchewan Book Awards, in 2014, for Book of the Year and Aboriginal Peoples’ Publishing Award.

As an ally for Indigenous Education and to Métis historical research, Cathy embraced every opportunity to share her findings with enthusiasm and reverence.  She instilled the notion that history is an entity that is important, retrievable, and revitalizing and that should be held high and never forgotten.

Cathy, you will be missed, held high and never forgotten.