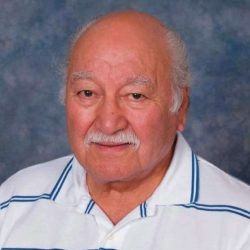 It is with great sadness that we announce the peaceful passing of our father, Cecil King, age 90, at the Royal University Hospital in Saskatoon.  Cecil was born on February 22, 1932, in Wikwemikong, Ontario. Predeceased by his Parents, David and Adeline, and siblings Don and Elizabeth, Cecil is survived by his sister, Loretta.  Cecil had five children: Denise predeceased (2002), Daryl (Gladys) of Buzwah, Anna-Leah of Regina, Alanis (Bitsy/Elizabeth) of Ottawa, and Shoo-Shoo (Troy) of Tyendinaga Mohawk Territory; seven grandchildren: Candace, Feather, Cheyenne, Tanis, Dylan, B’Elanna and Blake; and four great grandchildren: Phoenix, Winter, Declan, and Hudson. Cecil leaves behind his beloved wife, Catherine, and he will be remembered fondly by his nieces and nephews.

Cecil grew up in Wikwemikong in a part of the community called Two Clock (Buzwah).  During his early years, he learned about living with and adapting to the environment and he used that learning to teach others as he embarked on a lifetime career in Indigenous Education.  As an Indigenous Educator for more than sixty years, Cecil helped create curriculum that connected with Indigenous worldview, developed First Nation language courses used in elementary and secondary schools, founded the Indian Teacher Education Program at the University of Saskatchewan, and was the first director of the Aboriginal Teacher Education Program at Queen’s University.

Although Cecil received numerous acknowledgments, awards and recognition for his work and his approach to education, including an Aboriginal Achievement Award in Education (2009), the true reward for him was for his students to realize their potential and to use their gifts to serve their communities.  Cecil’s humility helped him to build relationships unhindered by hierarchy where he and his students could engage in meaningful discussions fostering reciprocity in learning and growth.

As Cecil’s children, we understand that this loss is not our own, Cecil has touched many lives in a significant way as colleague, as teacher, as mentor, and as friend…it’s all our loss.  We know we are not alone in cherishing the lessons he shared and taught to strengthen our communities – the importance of identity, language, and relationship and our interconnectedness with all life.  We all carry the responsibility to continue the great work he started.

Celebrate Cecil’s life and your relationship with him, cherish the memories, the dialogue, the laughter as we cherish our love for him…Dad, baa maa pii kaawaabmin.