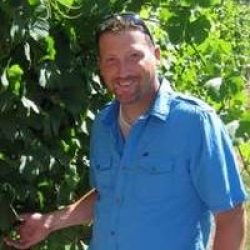 Christopher Sean Hawkins, known to most as “Chris” or “Star”, was born Nov 15, 1976, to Roger and Sue Hawkins at Melfort Hospital in Saskatchewan. He attended and graduated from RJ Humphrey High School in Kinistino in 1994. He graduated from Olds College with a certificate in Seed and Grain Technology in 1998 and loved riding bulls for Olds College in the rodeo. There he met his girlfriend, Michelle Turner, who was always a close friend and a warm shoulder to lean on throughout his life. He had a wonderful career in Agriculture and he was very passionate about farming and helping and supporting farmers at the ground level.

He married Holly Davidson (Nee Hadland) on June 26, 1999, and they had a beautiful son together, Bryden Sean Hawkins born Aug 24, 2001. After their relationship ended, Chris moved around a lot throughout Alberta, British Columbia, and Saskatchewan, working in a variety of Agricultural settings. On Nov 18, 2013, he married Kristi Cheetham, and they settled down in Sanford, Manitoba. There he developed and sold a very successful web based agriculture company called AgChemExpert Ltd. (ACE). They had a dog, Audrey, that he loved and cared for until his passing. Kristi and Chris went their separate ways in 2019, but they still always kept in touch. Since 2019, he had moved around a lot and recently bought a house in Melfort, Saskatchewan, which is where he resided until his passing. He loved the people of Kinistino, Saskatchewan and surrounding area. He especially loved The Taylor Family, The Cay family, The Fitzsimmons family and one of his oldest and dearest friends Shane.

Chris had the most beautiful heart. Unfortunatel,y he had a lot of struggles in his mind that made his life path a difficult one. Throughout his struggles one thing was important to him – and that was his freedom. Chris loved to chat with anyone he met. He made an impact on everyone who passed through his life.  He loved to buy flowers for others just to brighten their day. There are so many people who loved him and cared about him. Chris was so lucky to be surround by so many people who were able to lend him a helping hand when he needed one. Behind every human life there is family and friends who love them dearly! The Hawkins’ family would like to thank all those that came into Chris’s life and lent him that kind and loving hand!

He loved motorbikes and racing motorbikes. He loved cars and loud music. He loved horses, bull riding and his cowboy hat. This love of “the western way” came from his mum, Sue. He loved the farm life, gardening, agriculture and every farmer was important to him. He always wanted to make a difference. His dog Audrey “Boo” was his furry friend and was always by his side. Chris was a person who loved to live his life on the edge and it was important to him to have the freedom to be himself.

The most important love to Chris was that of his son, Bryden. The day Bryden was born was the happiest time of his life. Chris loved to spend time with Bryden having adventures fishing, riding motorbikes, talking about cars and sledding. They would have PS4 hockey tournament game nights on a regular basis and Chris gave Bryden the nickname “Beans”. Bryden was Chris’ pride and joy in this life.

The name “Star” came from the fact that his dad, Roger Graham Hawkins, owned a company called “StarHawk Satellite” and Chris used to help his dad set up satellite dishes for years in all weather conditions. They also loved to fish together and spent many trips together out on the water. They also shared a passion for motorbikes and would plan rides together, including a tour down the west coast.

Christopher loved his mum, Sue, who passed away March 11, 2008, and he struggled to deal with this loss.  On his motorbike Chris wrote the dedication “Two Up With Susan” in her memory. She was the nucleus of the Hawkins family and he missed her terribly.

You could say that Chris and his sister Shanda had a typical brother/sister childhood relationship. Despite the sibling rivalry over the years, they cared deeply for each other and she always wanted to ensure he was safe, secure and loved. Chris was always important to Shanda and her family.  He was always the “fun uncle”.

Chris will be lovingly remembered by his son Bryden Sean Hawkins of Medicine Hat, Alberta, his dad, Roger Graham Hawkins of Airdrie, AB, his sister Shanda Dawn (Nee Hawkins)(Steve)Tansowny and their daughters Mackenzie, Sydney, Madison Tansowny of Calgary, AB, all of his aunts, uncles and cousins from England, as well as so many friends, coworkers and those that he thought of as family in Kinistino and the surrounding area that he called “home”.

Chris was predeceased by his loving mum, Susan Marjorie (Shaw) Hawkins. He is reunited with her now, giving her a big hug and they are both smiling and riding horses together once again.

Martens Warman Funeral Home is honoured to have cared for Mr. Hawkins and his family with his arrangements.