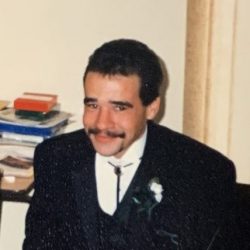 With heartfelt sadness, we announce the passing of Cory Wiebe on January 12th, 2022, at the age of 45 years.

Cory Wiebe was born on March 17th, 1976, in Saskatoon, SK. He grew up on a farm situated near the river and attended school in Hague up until Grade 8. Cory was raised in a loving Christian home and had a passion for the outdoors. loved doing anything from fishing to farming.

During his younger years Cory and his brother Steven spent a lot of time together, usually getting into some sort of mischief. Growing up there were always cousins and neighbors joining together in all the fun times. Many days were spent swimming or canoeing in the river, tobogganing, and building forts, to name just a few of the activities that went on.

Cory started working around the age of 13. He usually helped on neighboring farms milking cows and doing other jobs like driving heavy machinery. Cory loved being around animals and farming so much that he decided to purchase his own cattle and raise them on his parents’ farm. Cory had an amazing work ethic but still took the time to have fun either tinkering on old cars or practicing his “driving skills” on a nearby field. When Cory was old enough, he went to school to get his 1A license and began his career as a truck driver.

Cory had strong faith and was baptized with his former spouse Novalee in 2000. In the last 10 years or so leading up to Cory’s passing, he spent his time with his friend Samantha Hansen, whom he lived with in Saskatoon. After struggling with mental illness for a number of years, which also caused debilitating physical pain, Cory passed away suddenly.

Cory is predeceased by his father Isaac Wiebe, just 2 months earlier. He is survived by his loving mother Betty Wiebe; Brothers James, and Steven (Cheryl), and his sister Tammy (Danny); Daughter Lexi Barber and her mom Novalee Barber. He also leaves behind many nieces and nephews, cousins, aunts, uncles, and friends.

We will always remember Cory the way he once was and not the way he was after what mental illness did to him. We trust that he is at peace and now rejoicing with the lord.

In lieu of flowers, we ask that you donate to a charity that supports mental health.