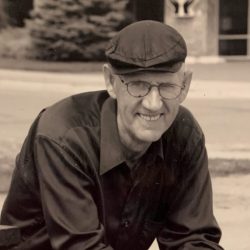 It is with heartfelt sadness that we announce the passing of David John Peters, on February 4th, 2022, at the age of 78 years.

David was the 2nd oldest son to Katharina and Peter M Peters of Hepburn Sask. Dad liked to say he was the only child out of 18 that was born in a hospital.  He left home at the age of 17 to go and work construction and later, drywall.

David met the love of his life, Ann Berg. They had 3 daughters. When he found a job in Alberta on a cattle ranch, that became home for 7 years. But the lure of Saskatchewan never left, and he was able to purchase his father’s creamery farm in 1978. He grew this farm into a large dairy operation.

David loved farming but his health made him retire around 1994. But he did not stop working. He worked for some local farmers and started driving for local businesses. He was happy behind the wheel. Driving to La Crete to see family was something mom and dad loved to do as well. They went many miles in the truck and camper.

When COVID came and he was no longer allowed to drive to Alberta, he threw himself into cutting jeans for thrift stores in Warman and Saskatoon. It became his job.

He could not sit still. He was found just last week on the roof of the house clearing the ice from the plumbing stacks. Heights did not bother him at all. I think that was a Peters thing.

David was very social and would take walks to get a break from cutting. He enjoyed stopping in at his siblings’ houses during his walks. He always had a smile and a hug for all.

David will be missed by many. Including his neighbors on Lane Court.