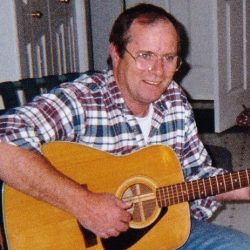 It is with heartfelt sadness that we announce the passing of David Nelson Atkinson at the age of 68 years.

Dave lived in many different cities and towns throughout Canada and was always known as “Dave The Plumber” as he always started up a plumbing business everywhere he ended up. He thoroughly enjoyed fishing and carried a rod with him in the truck 24/7, he would often fish his way to and from work. In his younger years, he was very active in gun clubs and different organizations. He loved playing his guitar and we all enjoyed listening.

In the late 90’s Dave moved to Meadow Lake, SK, and soon after met the love of his life, Donna. Dave and Donna got married on August 2nd, 2003, planted their roots, and raised their family. Dave battled cancer and won in 2008, but it came back and Dave passed away on August 8th, 2021 in Meadow Lake with his wife by his side.

A Celebration of Dave’s life will be held at the family home on Saturday, August 14, 2021, at 405 Bauman Street in Meadow Lake, SK in a come-and-go fashion throughout the day. In lieu of flowers, please donate to the Gofundme page.