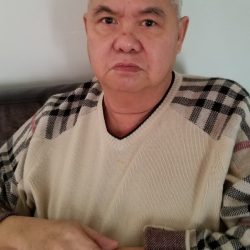 With heartfelt sadness, we announce the passing of Dennis Yin Chung Tse at the age of 70 years, on December 17th, 2021.

Dennis Yin Chung Tse was born in Guangzhou, China, in 1951. As a young man in his teens, he left China swimming across the water to Hong Kong where he lived for 10 years.

Dennis did a wide range of jobs in Hong Kong, construction, truck driver, and factory worker. Dennis remembered the sights and sounds of Hong Kong and years later he would recognize places from his youth on TV and tell the family stories of his time there. Dennis later moved to Belgium to work as a cook where he stayed for two years, writing letters back and forth to his sister’s friend Valerie. In 1981 Dennis followed Valerie to Canada and they were married and began their life together, later having 4 children and one grandchild. Dennis found work in various restaurants as a cook which supported his family for 35 years, including at his own place, Bedford Chinese Restaurant which was open for 16 years. Life wasn’t always easy but through hard work and dedication Dennis always supported Valerie and his family with love. Dennis liked James Bond movies, keeping up with the news, experimenting in the kitchen cooking everyone’s favourite meals, and gardening.

Dennis was known in his family as a prankster; on a busy day at the restaurant the health inspector came to visit. The inspector asked for Dennis’s name: ‘Michael Jordan’, (in Cantonese ‘leave me alone’) was the reply. ‘Michael Jordan’ passed the inspection. Dennis’ daughters Joanne and Jenny remember going for weekend coffees and that even though he worked hard he still always found time to go for dim sum or spend time with his family playing card games like Big 2 which he usually won. Dennis’s daughter Dorothy remembers time in the restaurant, saying she was hungry and getting told ‘the kitchen is right there!’ Dorothy always picked the most expensive ingredients in the fridge which always annoyed Dennis, though he admitted her cooking was good, and she is thankful for the time spent learning to cook together. Andrew also appreciated Dennis’s cooking, especially the sweet and sour pork that he didn’t want to try but couldn’t stop eating! Gardening was something he shared with his son Kyle, who will also miss spending time outside in the fresh air and watching the sunsets together.  Dennis was always happy playing with his grandaughter Jolene; watching TV, singing ‘old MacDonald’ and playing games. Grandpa always protected Jolene from getting in trouble and was there for a hug and kiss and an ‘oh my gosh’ which Jolene copies all the time. Jolene may not remember as much as she gets older, so it is up to us to keep her memory of ‘Gung Gung’ alive and well.

Rest in Peace Dennis, a son, brother, father, grandfather, and friend. You will be missed.

A private service will be held, arrangements have been entrusted to Martens Warman Funeral Home (306) 934-4888.