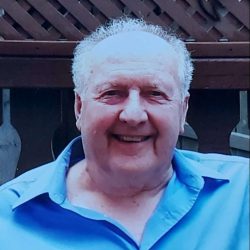 It is with great sadness that we announce the passing of Derrick Sweet, on November 17, 2022, at the age of 88.

Derrick was born in England on May 12, 1934 and emigrated to Canada with his family in 1976. At 14 years of age, he trained as an apprentice as a Painter and Decorator and remained in that profession the rest of his life. At 18 he was conscripted into the British Army and served two years during peace time. Derrick was a man who liked to participate in activities. As a younger man, he was very involved with his budgie aviary, gardening, playing skittles, and ball room dancing.

In Canada he became involved in five pin bowling, lawn bowling, square dancing, and ballroom dancing. He was a competitive man in any activity he undertook and strove for perfection.  He also loved animals, watching sports, and music.The Beatles were his all time favourite band and he became an avid collector of their music and paraphernalia. In fact, music and dancing proved to be very important activities in his life as he met his first wife, Norma, ballroom dancing, and his second wife, Donna, square dancing. Derrick was also a very funny man.  He loved to tell corny jokes and make people laugh. He will be deeply missed.

A celebration of Derrick’s life will occur on December 12th, 2022, 2:00 p.m., at the Royal Canadian Legion, 606 Spadina Crescent West, Saskatoon, SK. A further celebration of his life and interment of his ashes will follow in the Spring. In lieu of flowers, the family requests that donations be made to the Alzheimer Society.

Martens Warman Funeral Home is both honoured and privileged to care for Mr. Sweet and his arrangements.