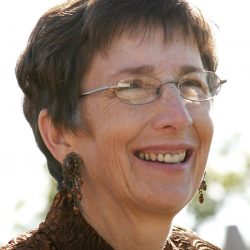 It is with heavy hearts that we announce the peaceful passing of Diane Ethel Ambros (Dillabaugh) on January 12, 2022, at the age of 73.

Diane Ethel Ambros was born April 11,1948 in Kerrobert, SK.  She was the only child of William (Bill) and Ruth Dillabaugh. Diane lived on a farm near Coleville attending school in Kerrobert. During her school years, she studied violin and piano, and was a member of the Saskatoon Youth Orchestra. Diane then attended University of Saskatchewan, (including an exchange year at Trenton State College N.J.) obtaining a Bachelor of Education. During these years, she was second chair violin with the Saskatoon Symphony Orchestra and the New Jersey Symphony.

Diane met Jud Ambros through his sister Marleen, and they married on December 23, 1969.

They were happily married 52 years, keeping the marriage strong with 35 years of involvement with Marriage Encounter. They moved to the Ambros family farm near Kelfield and remained there until 2016, when they moved to Saskatoon.

Diane and Jud welcomed three children into their family: David, Jason, and Angela. During the farming years, Diane enjoyed gardening, helping on the farm, and famously being the main combine operator for years. She was involved in local music, teaching piano and violin, hosting small concerts and participation in music festival. She engaged in the kid’s activities such as 4H and skiing and was actively involved in church. Diane enjoyed baking and cooking and ran a successful business selling Bosch Kitchen Machines. Of all her activities and hobbies, one of her greatest joys was welcoming each of her grandkids.

After moving to Saskatoon, she continued to spend time with her grandchildren in Canada and Australia, she enjoyed traveling and attending concerts. Diane remained involved with church, and was involved with Parkinson support activities, volunteered with Open Doors and the Saskatoon Symphony book sale. She remained an avid reader throughout her entire life. Jud made countless trips to the library to keep the shelves full during her illness.

In 2016 Diane was diagnosed with Parkinson’s and in 2019 she faced her battle with cancer. She fought courageously, leaning on her lifelong faith in Jesus. She was loving cared for by her husband Jud, her children and their families. She is now Parkinson’s and cancer free, safe with her Lord and Savior Jesus Christ.

She will be remembered forever by her husband Jud, her children David (Glenna) [Evangeline, Jacob and Estella], Jason (Blanca) [Jessica], Angela (Leigh) [Levi, Malakai, Aliyah], as well as her extended family. She will also be missed by her many friends, whom she treated as family.  When she left to be forever with Jesus, she joined her parents and her grandchildren Isaiah and Tori Jane in Heaven.

Funeral services will be held on January 19, 2022, at 1:00pm at Lakeview Church 15 RR5 #510, Saskatoon, SK. Light lunch to be held immediately after the service. Website: www.lakeviewchurch.com  All Covid Protocols will be followed, including the use of masks.

If you are unable to attend but would like to join the service online, you may view via https://www.youtube.com/watch?v=Qe5ZLJ0VAEc

In lieu of flowers, donations to World Vision or a charity of your choice can be made in memory of Diane Ambros.

Special thank you to the palliative care team at St. Paul’s Hospital where Diane spent her last weeks under their care.