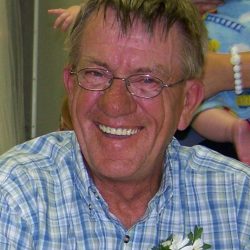 It is with heartfelt sadness that we announce the passing of Donald Jones at the age of 72 years, on December 7th, 2021.

Don was the first child born April 4,1949, in Saskatoon to Bob and Elsie Jones.

Don met the love of his life Anne McLean at a football game in the fall of 1973 and married June 29, 1974. They settled on their farm south of his parent’s yard and together they raised 4 wonderful children, Jennifer, Brian, April and Nancy. Don spent his time devoted to his family, farming, team roping and playing hockey with his dad.

Don was a charter member of the Lions Club, Board member of the United Church, First Responder for 20 years, Volunteer Fire Fighter and Fire Chief and Community pasture member.  After retiring from farming, he enjoyed camping trips with family and friends, watching his grandchildren grow and driving his family nuts with Tik Tok.

Don was predeceased by his parents Bob and Elsie.  Don leaves behind his wife Anne of 47 years, his children Jennifer (Matt), Brian (Renee), April, Nancy (Auryn) and his grandchildren Robert, Rachel, Grayson, Jaxon, Max and Ben.

Dad, we love you and are going to miss you.

In lieu of flowers, donations may be made to the charity of one’s choice.