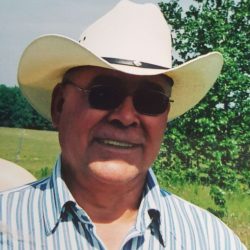 With heartfelt sadness, the family announces that Donald Norman Morin passed away on July 26, 2021, at the age of 74 years.

Don loved animals almost as much as he loved people. His family and friends would attest to that. From loving his wife and children and grandchildren, to loving and caring about all he met, he was always willing to help everyone, and he did – with humor and kind words and his ability to heal. He has touched the lives of so many and will not be forgotten ever.

At two years old, Don was able to work with horses which included climbing a fence or whatever to saddle his horse ‘Silver’ and also rope the roosters. Don proved his ability to perform ranch work and care for horses as he grew his dream, the Don Morin Family Ranch. Don solidified his Professional Cowboy status as he demonstrated his athletic abilities at Rodeos and Stampedes throughout Western Canada. Don rode countless broncs and roped countless animals at performances, which resulted in over 100 trophies, 20 prize saddles, and numerous belt buckles and prizes won. Recognized by the Canadian Cowboys Association, Don was titled Saddle Bronc Rider in 1973. Don was also a Member of Team Saskatchewan, which competed at the Calgary Stampede. He lived to ride and loved the rush of competition.

Don’s favorite passion at the ranch was building his horse herd. Don was not only recognized for his horse training skills, but as well for his ability to diagnosis and treat his horses, those of is neighbors and horses used in national competitions.

Don had natural ability, and desire to heal his fellow man. Trained in CPR, First Aid and Jin Shin Jyutsu, Don traveled extensively through the Western Provinces to improve the health of many who came to see him.

With his education credentials and counseling abilities, Don was instrumental in the administrative and organization of Indigenous education and training in both Alberta and Saskatchewan.

As a statesman, Don served as a R.M. Councilor and as the first President of the Metis Rodeo and Chuckwagon Assoc.

Don’s favorite place was the great outdoors and although later in life his vision became impaired, with help Don was still a successful hunter. Fishing became his passion when his vision would not allow him to continue his other numerous pursuits. He loved going fishing with family and friends, and the best part was he didn’t have to clean the fish!

Donald Norman Morin was many things, but most importantly a loving husband to Diana and loving father to Lee and Alison (passed November 24, 1981) Donald Norman Morin succumbed to cancer on July 26, 2021. Don will be missed by his Family, Friends and all that knew him.