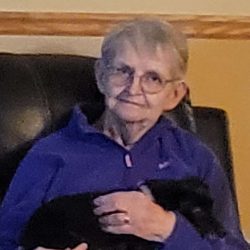 With heartfelt sadness, we announce that Dorothy passed away peacefully June 29, 2022, at the age of 73 years.

Dorothy was raised on a farm southwest of Hanley. In her younger years Dorothy attended the one room Bohrson country school and was a member of the Kenaston 4-H beef club. After graduating from Hanley high school Dorothy attended Saskatoon Business College taking an accounting course. She worked for Sears in Saskatoon and Regina prior to staying at home to raise 3 children.

In 1979 Dorothy and Ken moved to an acreage near Clavet. Dorothy was involved with the Clavet United Church. She was awarded Clavet Citizen of the year for her work organizing bingos to support the construction of the Clavet Arena.

Dorothy enjoyed volunteering at the Western Development Museum serving several terms on the executive of the Women’s Auxiliary. She also enjoyed spending time at the farm, attending to her flowers and spoiling her grandchildren.

Dorothy is survived by her husband of 52 years Ken, son Kevin (Tracie) of Regina, daughters Regan Deschuk (Todd) of Saskatoon and Jody Schweigert (Colin) of Melfort and her 5 grandchildren Wyatt (Emily Hitchings) and Rhett Deschuk, Brody and Josh McKnight and Asher Schweigert. She is also survived by her brothers Gerald and Bob (Jackie) Haight and many nieces and nephews. She is also survived by her Aunt Fern Haight of Saskatoon. She was predeceased by her parents Howard and Arlene, and in laws Earl and Norma McKnight and sister-in-law Verla Haight.

Dorothy’s celebration of life will be held July 10th at the Saskatoon Shrine Club (below the Masonic Temple) 1021 Saskatchewan Cres West at 11:30 with lunch to follow. The entrance is on the north side of the building (wheelchair accessible).

In lieu of flowers, the family requests donations to the Saskatchewan Cancer Foundation https://cancerfoundationsask.ca or Size Small Dog Rescue www.ssdr.ca