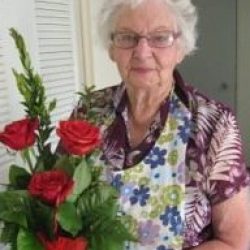 ELSIE KOWALENKO passed away peacefully at St. Paul’s Hospital in Saskatoon on Wednesday, May 12th at the age of 96. She leaves to mourn her daughter Karen, her son Gerald, son-in-law Gary Evjen and sister-in-law Mabel Hoppe. She was predeceased by her husband, George in 2000 and her brother George in 1999.

Ilsa Klara Hanna Specka wasborn in the Queen Mary Lizard Lake district of Glenside Municipality Febuary 5, 1925 to Carl and Dora (Heinacker) Specka. Carl had immigrated to Canada from Germany in 1904 and Dora came to Canada in 1923.
ELSIE was the younger of two children. Her brother George was born in 1924.

Elsie attended Normal Schools and studied nursing at the Royal Alexandra Hospital in Edmonton. She taught at several country schools including Swampy Lake, Roland Hill and Light School near Arelee. Elsie met her future husband, George Kowalenko, during her time at Light School. They married in 1946 and lived with George’s parents Jacob and Chimka on the family homestead until their daughter Karen was born. Then, they moved to their own home on the farm just 2 km east of the Kowalenko homestead.

George and Elsie farmed together with George’s younger brother Fred and his wife, Clara for fifty years before retiring. Theirs was a mixed farm. When grain prices were low, they raised more cattle and vice versa. It was a very good life.

When Elsie married George, she converted to the Mennonite Brethren religion. Their
Christian faith was important to them both. In their everyday life, they
practised their beliefs through their involvement in their community and province. They worked for or supported the Wheat Pool, the National Farmers’ Union and the CCF/NDP for their entire lives.

Elsie and George were very involved in the establishment of Medicare in Saskatchewan. Health care for all was their wish for everyone. Due to various
illnesses, the Kowalenko family never got out of debt until the late 1940s because of medical bills. They did not want any other family to experience the same hardships.

Elsie had many interests. She loved gardening. She loved reading and could keep a branch library operating all by herself! She loved children and taught Sunday School for many years. She cooked during summer camp at Ranger Lake for many years. And, she was a 4-H Homecraft Club leader for Sonningdale 4-H Club for many years.
She learned to sew and took many courses on tailoring and was able to sew all her own and her daughter’s clothing and even some for her son and husband.

After George passed away in 2000, Elsie remained on the farm until 2008. Because George had Alzheimer disease, Elsie learned to drive and got her driving license at the age of 72. And when life alone on the farm got to be too onerous, she happily
moved to Perdue where she knew everyone and everyone knew her.

While still on the farm, one of Elsie’s favourite activities was quilt making with the Arlee ladies led by Erna Jantzen. Elsie’s job was to do the trimming and hemming and she was good at it.

In 2010, Elsie’s children took her to Europe and managed to visit England, France, Germany, Poland, the Czech Republic and Austria and Elsie was able to reconnect with her relatives in Frankfurt, Germany.

Life in Perdue was very happy. Elsie got involved with New Horizons, often baking pies and cakes to serve with coffee. Until only a few years ago, she was still preparing a huge cauldron of carrots for the annual Perdue Fall Supper as well as helping in the kitchen. She looked forward to and enjoyed every opportunity to be involved in community activities.

Elsie was cared for and watched over by her neighbours in Perdue. They checked on her and they picked her up for church on Sundays and they often brought food. The librarian delivered books to Elsie’s home. For these kindnesses, Elsie’s family is eternally grateful. Elsie lived a long and happy life and was not afraid of death.

Elsie’s funeral service will be held at the Perdue United Church on Saturday, May 22nd at 2 PM. Visitation will take place from 1:30 to 2 PM immediately prior to the service.

Interment will take place immediately after the service at the Arelee Mennonite Cemetery.

Due to Covid restrictions, attendance at the funeral service is by invitation only. A community celebration of Elsie’s life will take place when it is safe to do so.

In lieu of flowers please consider making a donation to the Arelee Mennonite Brethren Cemetery Fund or MCC.

Funeral Arrangements have been entrusted to Martens Warman Funeral Home