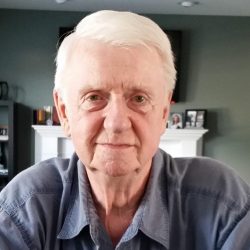 It is with great sadness that the family of John Eric Gordon King announce his sudden passing. Eric passed away peacefully at Royal University Hospital in Saskatoon on January 17, 2022 at the age of 79 years. Eric was born to Andrew Frank and Violet May (nee McKinnon) King in Hoey, Sask on August 09th, 1942. He grew up as the son of a grain elevator agent along with 4 sisters and 2 brothers.

On July 27th, 1968 Eric married the love of his life, Marlene Elder. They had two children, Jason and Jill. Eric worked at Codville for 5 years and Safeway for 34 years. In 2006, he retired from Safeway and started his new career, working for his children.

Eric was an upbeat, positive father, who loved “Dad jokes” and bad puns. He was quick to smile and he loved to laugh, his sense of humor and infectious laughter filled the room on many family occasions. Eric loved to learn, from carpentry to plumbing to electrical, he was the ultimate handyman. There was no challenge too hard or any amount of work too great to stop him from home renovations, helping his children with their homes or fixing vehicles. Although his knowledge seemed infinite at times, he never felt the need to boast or impress others.

Eric’s focus and priority was always family, it was all that mattered to him. Spending time together at Emma Lake, the trailer that Eric and Marlene were constantly improving and modifying, all for our family’s enjoyment, will live on forever in our memories. Eric is loved beyond words and will be missed endlessly.

It was Eric’s final wish to be cremated and to have no funeral service.  In lieu of flowers, the family has asked that donations be made to the Heart and Stroke Foundation.