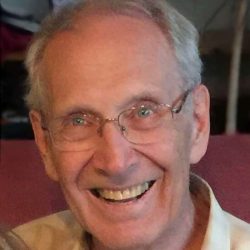 Garry Wacker, Professor Emeritus, passed away peacefully with his family at his side on June 2, 2022, at the age of 82 years. Garry worked at the College of Engineering for 37 years in the electrical department and later as Assistant Dean. He authored many research papers and as a result, he and his wife Joan were able to travel to many European countries. He also contributed to the engineering profession via his involvement in numerous committees, including serving as president for both APEGS and CCPE and representing the Canadian engineering profession on NAFTA.

Garry was happiest when he was designing and building things. One of his earlier creations was a unique tent trailer with fold-out sides (in addition to the typical fold-out ends) that was used for family travels across Canada and into the USA. A hillside, lakefront cottage at Turtle Lake came later with the entire family wielding hammers and nails to bring his drawings to life. He applied his expertise and creativity to a huge array of design projects throughout his lifetime, assisting his growing family, his church, and his community whenever possible. His most recent endeavours involved numerous projects for St Volodymyr Villa, his and Joan’s home of the past 5 years.

Thank you to the staff at City, RUH, and St Pauls hospitals who took care of Garry during his illness. A special thank you to Drs. Thorpe and Campbell of the Saskatchewan MAID program.

Due to the ongoing pandemic, Garry requested no funeral service be held. Condolences and memories can be left for the family at www.martenswarman.ca.

In lieu of flowers, donations can be made to the charity of your choice.