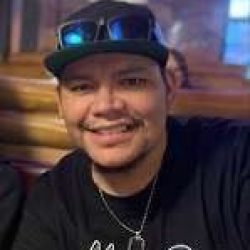 Geordon Levi Lemaigre was born on February 25, 1987, in Saskatoon, SK, and passed away unexpectedly on April 6, 2022, in Saskatoon.  He was 35 years old.  Geordon was the first of four children for Guy and Lorna Lemaigre.  Geordon soon welcomed a brother Tanner and sisters Cheyanne and Chantal and grew up with sisters Allison and Erica.

Geordon enjoyed life.  He had a large extended family, and no matter where he went, he found people that became friends and soon became family.  He loved to visit, joke around, and check in on those he loved and cared about.

Geordon welcomed his own children into this world.  His baby girl Jayda Jewel, and his sons Traydon, Kache, and Levi.  He also treated his nieces and nephews like his own.  His children meant the world to Geordon.

Geordon was named after his grandfathers: George Lemaigre and Gordon McLeod.  Geordon and his grandpa Gordon had the exact same walk, often it looked like Gordon had a shadow as they walked together.

Geordon loved to sketch tattoos, loved drawing, and his knowledge of movie history was incredible. He knew actors, their lines, and what movies they were in and shared his passion with other movie buffs.

Geordon tried his hand at a few different careers, with the latest being the Dene Teacher Education Program.  Geordon would have been a great teacher.  He was also accepted in the Social Work program.  Fitting careers for a man who loved people and gave so much of himself to others.

Geordon loved his family.  His mom Lorna expressed how much he loved and how deeply he will be missed.  Geordon and his Lemaigre family have suffered losses that no one family should ever have to endure.  Geordon said goodbye to his favorite person in December of 2021 – His uncle Ben who was more of a big brother than an uncle figure.  Geordon also lost his brother Tanner in October of 2020, something Geordon was not able to overcome; his grief was overwhelming when combined with the loss of his dad, his rock, in 2009. In the span of too few years, goodbyes were also said to Geordan’s auntie Lucy, his sister Erica, his grandfathers, George Lemaigre and Gordon McLeod, and his uncle Neil McLeod. Through these devastating losses, Geordon was the steadfast symbol of kindness and generosity.

As a family, we know that Geordon is wrapped in love by all who greeted him in Heaven.  We will forever miss his mischievous smile, his laughter, and his kindness.

Wake services will be held at the home of Geordon’s grandmother Flora Lemaigre at Clearwater River Dene Nation starting on Saturday, April 9th.  Funeral Services for Geordon will be on Monday April 11, 2022, at 2:00 pm at Our Lady of the Visitation Roman Catholic Church in La Loche, SK.

The Lemaigre family would like to thank everyone who has reached out and supported them during this most difficult time.