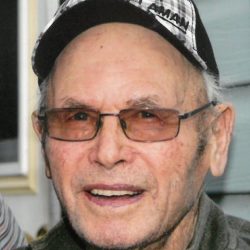 Dad was born in Provost, Alberta on January 24, 1928 to Gerhard and Maria Kroeker, who had immigrated from Neuendorf, Russia. His twin sister, Ruby, had been born on the family farm the evening before, but because there were complications, Grandpa Kroeker hitched up the team of horses in the middle of winter and took his precious wife approximately 9 miles north to meet the doctor in the town of Provost. This was a terrible ordeal for Grandma Kroeker and she passed away about a week later.  Grandpa Kroeker was devastated and now he had a challenging situation.  There were already three children in the family, Helen, Mary, and Nick. Now he had two infants to take care of.  As time for seeding approached on the farm, the Dirksens agreed to take Ruby in and the Wiebes took George into their family.  Then came the “dirty thirties” and the Wiebes moved to Bournemouth.  Meanwhile, Grandpa Kroeker remarried Elizabeth Friesen, a widower who had two children of her own – Louise and Peggy.  The family continued to grow with five additional children, Agnes, Jack, Henry, Ernie, and Vern.  Although Grandpa’s intension was to get George back, one can easily understand how that never came to pass. Over the years, Grandpa Kroeker came to visit his George and we don’t know what conversations took place, but eventually George understood that the man coming to visit was his dad.

Dad didn’t grow up alone at the Wiebe house.  Ben and Helen Wiebe adopted a sister for him, Anita. The two grew up walking to school, enjoying the exciting threshing and butchering days, visiting Aunt Lizzie and Uncle John, etc.  Dad also loved to go bike riding on Sunday afternoons with the Loewen boys.

At age 18, Grandpa Wiebe offered Dad the choice whether or not he wanted to go live with his biological dad who was now living in Yarrow, B.C. on a raspberry farm. There Dad was introduced to picking hops in the hot sun.  The whole family packed a lunch, had their own row to pick and put their hops in bags. Dad wasn’t really impressed with this difficult work and it wasn’t very long before he was once again on the train to head back east.  Back in Saskatchewan, Dad’s neighbour Cornie Isaac and his wife Martha had a baby.  Martha’s twin sister Erna Driediger came to help out with the new baby. Love was soon in the air and Erna became Dad’s bride in Watrous on October 18, 1953. Their first son, Alvin Gerhard, was born June 17, 1955.  Lois Ruth arrived on December 4, 1957.  The family became complete with the arrival of Leslie David on January 11, 1963.

Dad farmed all his life.  He loved the land from seeding to harvest.  He would often have a 15-minute snooze on the floor after dinner and be good to go.  As the years went by, Dad was able to farm with a fairly new John Deere tractor with cab, heater, and air conditioning. This gave him great pleasure and would always want to till the soil.

Dad was a devote Christian and was active in the church including being the Sunday School Superintendent for a couple years.  One year he arranged to have the Children’s Day picnic and games in his pasture surrounded by big, beautiful evergreens.

Sunday afternoons were for visiting, but not just Sundays. Our family would go visiting on Friday evenings as well. Dad would often even take Alvin with him on week day evenings to visit one of the many bachelors in the area.  Alvin said he was a “professional visitor”!

Any trips that were taken were always to the Frazer Valley and Vancouver Island to see brothers and sisters.  Treats were always plentiful along the way.

Dad loved his horses and cattle.  Hooking up a horse to the cutter and giving us rides was great fun.  Later on, he used it to pull the grandkids with tubes and sleighs.

Les stayed on the farm and gradually took over the work load.  Dad purchased the first of a few quads and put many a mile on them checking crops and for pure enjoyment.  Then came snowmobiling in the winter.  Many times he worried Mom when she thought he had been gone too long. Maybe this was his way of getting out of chores around the house, ha ha!

As time passed, Dad and Mom’s health began to decline. On September 15, 2019, we helped them make the move to Pineview in Rosthern.  Dad was 90 years old at the time.  Shortly thereafter, the new Sunrise area opened up and Dad and Mom were the first couple to move in.  They had a beautiful south room looking out at the red barn, corrals and horses.

On October 18, 2020, Dad and Mom celebrated their 67th wedding anniversary, Covid style. We gathered around outside, visiting and watching each other eat cake through the window. Then in January, we celebrated Dad’s 93rd birthday the same way, but this time with ice cream cake.  Only in Saskatchewan would you stand out in the cold in January and eat ice cream cake!

More health issues and time spent in hospital meant that Dad and Mom had to make the move to Level 4 care. There were so many trips to see them with DQ ice cream treats in hand!

We knew Dad’s days were numbered after his visit to RUH in Saskatoon, so we spent extra time with him. His three children took turns spending the day with him, grandchildren came and friends and relatives came. Every visit, every phone call, and every FaceTime was so appreciated! He loved his family dearly and we will all cherish our memories of our times here together.

Dad passed away peacefully on June 25th with Mom by his side. We were very thankful for the loving care he received by the staff in the Rosthern Hospital and Rosthern Nursing Home.