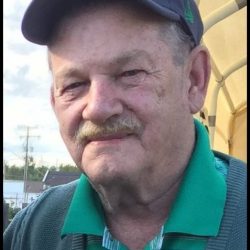 Gerry and Georgina married in February of 1970 in Regina, at which time he was working part time for the Government of Saskatchewan. To further his career, Gerry moved to LaRonge in 1973, just after his oldest daughter Tammy was born in Regina. Both his youngest daughter and son were born while they lived in LaRonge. During his time in the north, Gerry fostered his love of sports starting teams for both hockey and baseball, dubbing them both the LaRonge Lakers. He continued his career and love of sports in Prince Albert, moving there in 1982. His job saw the family moving back to Gerry’s hometown of Regina in 1988, where Gerry continued his love of sports but shifting his concentration to bowling and golf. The last move took Gerry and Georgina back north to Buffalo Narrows, with JR in tow in 1998. Gerry remained in Buffalo Narrows for the remainder of his life, retiring after 37 years in 2004.

Gerry loved his family dearly, his grandchildren being his pride and his Bump-a-roo (Declan) and Spinnelly (Peyton) his joy.

Gerry has been laid to rest in Buffalo Narrows, where a service was held March 18; a celebration of life will be held in Regina when restrictions enable a larger gathering.

Gerry has been laid to rest in Buffalo Narrows, where a service was held March 18; a celebration of life will be held in Regina when restrictions enable a larger gathering.