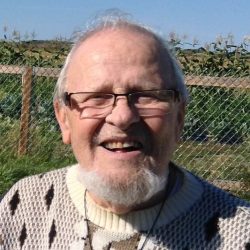 It is with heavy hearts that we announce the peaceful passing of Gerry Lavoie on August 3, 2021 at the age of 87. He was born on May 24, 1934 to Dr. Phillip E. Lavoie and Marie D’Lourdes Lavoie in Prud’Homme, SK.

Gerry was raised and grew up in the community he loved, Ile a La Crosse, where he later authored a book. He married the love of his life, Jeannie Lavoie on August 4, 1956 in Meadow Lake.

He served in the Navy as a Lieutenant Commander across Canada for 20 years, while raising a family. Upon retiring, he returned to his beloved north and taught “His Spoilies” in Beauval where he also coached hockey for four years.

Gerry was an avid singer and especially enjoyed singing on Sundays at church and serenading his beautiful wife.

He tinkered in carpentry and his favourite saying was “there is nothing I can’t do that Jeannie sets her mind to”.

We would like you to remember Gerry as the positive person he was with a great sense of humour and a coffee cup in his hand!