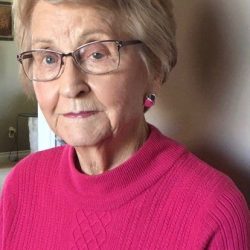 It is with the deepest sadness that our family says farewell to our incredible mother, grandmother, great-grandmother, aunt and friend – Gloria Wray. Gloria stood a mere five foot two – but was known to many as ‘BIG G’! Big in her caring. Big in her giving. And even BIGGER in her love.

In every way possible, she spent a lifetime doing whatever she could to make our lives better, easier and happier. Gloria Evelyn (Pope) Wray was born on August 29, 1929 to Robert and Myrtle Pope. She grew up on the family farm near Madison, Saskatchewan with her four siblings, Margery, Pat, Bob and Dauna. Despite the challenges of the Dirty 30’s, her childhood was filled with laughter, music and love of her close knit family. The Pope Ranch became a gathering place for relatives from near and far. Gloria was a prairie girl at heart, and nothing made her happier than to be helping out in the fields or with the cattle – or better yet, taking her horse for a ride in the breeze! After completing high school in Kindersley, Gloria moved to Saskatoon, where she became a secretary at the University of Saskatchewan.

There she met the love of her life, Bruce Wray. They were married in 1950 and moved to Regina, where they raised their four children. Gloria was a devoted wife and mother, always there to support the children’s hectic school, music and sports activities. It was a rare day that the children did not come home to the smell of fresh buns, cookies or brownies. If it wasn’t baking, Gloria would be sewing. Mending, designing , creating – no task was too great a challenge! Gloria was an avid curler and golfer. She and Bruce spent many summers golfing in Saskatchewan and winters golfing at Canyon Lake, Texas. They were dedicated Saskatchewan Roughrider fans. Seldom did they miss a home game or a TV broadcast. Following Bruce’s passing in 1998, Gloria began a new chapter in her life. She moved to the beautiful resort of Elkridge. With homes now in both Elkridge and Moose Jaw, she spent many hours travelling back and forth. She made trips to Texas, Alberta and Manitoba as well – making sure she was “always there’ for every major family and sports event that the children or grandchildren might have. How she loved the freedom of being ‘on the road’. She even passed her driving exam at age 90!

In 2017 Gloria moved to Hyde Park View in Saskatoon. She still had her home in Elkridge, so was able to spend time with her dear friends in both places. In 2020 yet another move was made, this time to the amazing Diamond House Care Home in Warman. Due to COVID and visitation restrictions, the wonderful, caring and loving staff of Diamond House became Gloria’s new ‘family’. There are not enough words to express our sincere appreciation for everything they did for her this past year! How Gloria loved “all her girls” and “all her guys”! Gloria was our ‘rock’….she was our inspiration. We will miss her dearly.

PASS IT ON If a kindness to you be shown, pass it on. Twas not meant for you alone, pass it on. Let it travel down the years, Let it wipe another’s tears, Til in heaven the deed appears, Pass it on.

Gloria passed away during surgery on June 9th. She was predeceased by her husband, Bruce Wray; her first grandson, Robbie Kelly; and her four siblings, Margery Seibert, Pat Knight, Bob Pope, and Dauna Besplug. She is lovingly remembered by her children, Shirley (Mike) McLeod, Shelley (Bill) Kelly, Elaine ( Bob) Klinck, Scott (Sue) Wray, her precious 11 grandchildren and their spouses, 27 great-grandchildren, and her much loved nieces and nephews. The family would like to express their thanks to the Warman Fire Department, the Saskatoon Paramedics and the staff at Royal University Hospital.

A private viewing was held on June 11th at Cherished Memories Funeral Home. Our sincere appreciation goes out to Kevin Martens and staff. A Celebration of Life will be held at a later date, pending COVID restrictions.