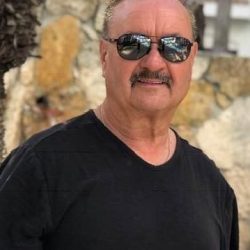 Gordon Michael Dmytruk passed away peacefully of natural causes while at home having his morning coffee on October 26, 2021, at 69 years of age.

Gord was a very special man who touched the lives of many.  He had a very deep connection with God and lived his life with compassion and love.  He courageously helped many people through the Alcoholics Anonymous program and made life-long friends along his journey.

Gord was born to Doris and Michael Dmytruk on October 1, 1952, in North Battleford Saskatchewan. He was predeceased by his sister, Iris Swistun. He grew up in Prince Albert where he met and married the love of his life Pat Wright in 1972.  They settled in Naicam in 1985 and raised their family there until 2000. Gord was so proud of all his children Ryan (Charity), Jillian (Trevor) and Nicole (Jeremy).  He especially cherished his grandkids: Spencer, Kelsen, Alliya, Kalan, Ryder, Blake, Levi and Griffin. He loved spending time with them and spent many hours in hockey rinks, beside volleyball courts and at music recitals supporting them in whatever activity they were in. His grandchildren will hold their memories of him close to their hearts forever.

Gord loved to work, and his entrepreneurial spirit ran deep.  He spent most of his career as a General Manager in the Co-operative System.  After retiring with the Co-op, he began working with Avatex as a Commercial Developer up until the present time.

A memorial bench will be placed at Waskesiu Lake in his honor.  It was Gord’s special place to be with family and friends.

A service will be held to celebrate his life on October 29th at 10:00am at the Immaculate Heart of Mary Church in Martensville.  The service will be livestreamed for those who would prefer to not attend in person. Livestream link https://youtu.be/onX_d2zj80A

In lieu of flowers, please consider making a donation to The Lighthouse Supported Living in Saskatoon. Donations can be made at https://www.lighthousesaskatoon.org/donatenow/