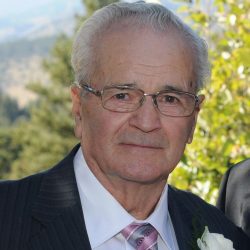 Gordon Stewart Lautermilch of Saskatoon (formerly Woodrow), passed away on December 28th, 2021, at the age of 89.  Gordon was born on the family farm near Woodrow, Saskatchewan on November 5th, 1932, to Albert and Katie (Schneider) Lautermilch. He was the third child of 4 children.

Gordon enjoyed his growing up years on the farm.  He loved animals and was often seen playing with his dog Sharky or looking after some of the barnyard animals.  He was always inquisitive, had endless questions and was creative in making his own toys out of things he found around the farm.  He attended Reimche school, which was 1 ½ miles away, and so he and his siblings either rode horses or their bicycles to get there. Because there were many aunts & uncles and cousins living in the area, Gordon often talked about the great times they had visiting and socializing with the many young people at that time.  As a young teen, Gordon was baptized and joined the Woodrow MB church.  When he reached high school, he along with a few friends, decided to attend Caronport High School for a few years.  Following that he worked at Frostad’s garage where he enjoyed learning about motors and working at what he really enjoyed.  The following year he decided to attend Herbert Bible School where his Uncle Ed was a teacher. Along with his studies Gordon became involved in the sports programs, as well as music studies and ministry, and he enjoyed playing his trumpet and singing in choirs and small groups.  He made some good lifelong friends.

It was during his time in Herbert that he met Wynn Hiebert and they developed a friendship.  After she finished one year of college at Briercrest, they were married.   The following year was spent In Winnipeg where Gordon continued his music studies, after which they spent a year in Calgary.  The next year they returned to Woodrow, and shortly after that Gordon suffered a hockey accident that resulted in complications which greatly impacted the rest of his life.  He managed the local Co-op bulk station for a few years and then left that to begin farming with his dad and brother Alvin, later moving on to develop his own farming operation. He took pride in looking after his fields and keeping his machinery in good repair, and as a hobby, he raised quarter horses.  Gordon & Wynn had three children, Deb, Terri and Daryl.  Because of Wynn’s university studies and teaching career they spent one winter in Regina and another in Saskatoon, as well as several at Caronport, SK.  In their retirement, they spent the winters in Calgary and summers at the farm.

Gordon was a long-time member of the Gideon Organization, conducted the church choir for years, sang in quartets and sang solos for numerous occasions.  He served his community in various capacities and enjoyed visiting and working with or having coffee with his neighbors and friends!  He enjoyed sports and along with his wife started a youth coffee house, which provided a safe fun space for the local youth.  He always enjoyed spending time with the young people.

With Gordon’s health deteriorating, they moved to Saskatoon, SK where Gordon moved into personal care with Wynn being able to live in a condo at the same building.  When he required more care, he moved to Circle Drive Special Care Home, which soon became his new ‘home’.

How Gordon will always be remembered:

Sociability – he always enjoyed being with people

Loyalty – His commitment to his faith and music ministry

A viewing will be held Friday, January 7th from 6-8 pm and a Celebration of Life is planned for Saturday, January 8th at 1:00 p.m. Both events to be held at the Cherished Memories Chapel in Martensville, SK. 591 Centennial Drive North. Arrangements entrusted to Martens Warman Funeral Home (306) 934-4888.

Gordon’s service will be available via live stream link https://youtu.be/Eazj0XoG0po

Charitable donations can be made to Shareword Global (formerly Gideons) or to the Canadian Cancer Research.