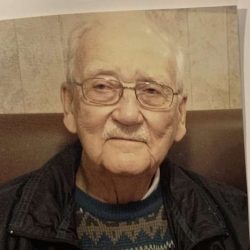 With heartfelt sadness, we announce the passing of Harold Lorne Jones on August 27, 2022, at the age of ninety-four.

Harold was born in Davidson, Sask. and later moved to Girvin, Sask., where he received his early education. Harold graduated from the University of Saskatchewan and St. Andrew’s College. He worked in the Public Service of Saskatchewan for thirty years, retiring in 1983 as Senior Vice-President of S.G.I.

A Funeral Mass will be held at St. Joseph’s Church on Saturday, September 10 at 2:00 p.m., 535 8 St. East, Saskatoon, Sask. Interment will be held at a later date at Hillcrest Memorial Gardens.

In lieu of flowers, donations may be made to the St. Joseph’s Church Parish, in memory of Harold.