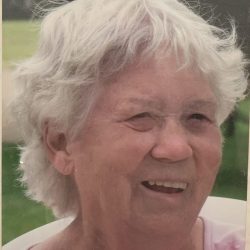 It is with heartfelt sadness that we announce the passing of Hazel Nowlin at the age of 98 years, on Saturday, October 2nd, 2021.

Hazel Floradell Nowlin was born on March 5th, 1923, in the community of Boggy Creek, Manitoba. Her parents were Gordon Arthur Nowlin and Nellie Beatrice Nowlin. She was the eldest of eight children born to this union. She was predeceased by her parents, her brother Neil, brother Gordon, sister Gwendolyn and sister Loretta. Her brother Glen currently resides in Richmond, BC. Her two sisters, Shirley Gornik and Virginia Bullock live in Swan River, Manitoba.

Hazel married Philip Weber on July 4th, 1941. Over the years five children were born into the family. Richard (Joyce), Marjorie (Mike), Ken (Nancy), Frances (Doug) and Gordon Glen. The family lived on the farm just east of Bellsite, Manitoba. Hazel loved the farm and enjoyed all aspects of farm life.

Hazel was predeceased by her husband Philip and oldest son, Richard. The other four children all currently reside in the Biggar/Arelee districts of Saskatchewan. Hazel was blessed with ten grandchildren and eighteen great grandchildren.