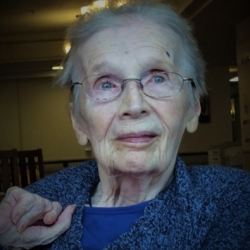 Helen was born on January 6th, 1930, on a Saskatchewan family farm located near Yellow Creek and Wakaw.  She died at the age of 91 in Coaldale, Alberta, on February 24th, 2021.

At the age of 79, Helen suffered a large, devastating stroke. She recovered far beyond medical expectations but was destined to spend the remaining portion of her life in a wheelchair. Immediately following her stroke, Helen rallied well and experienced slow but steady improvement. At her recovery zenith, her biggest accomplishment was walking again; with the help of workers, she could walk about 20 feet! Unfortunately, after about two years of continual improvement, Helen’s health turned, and she began to gradually decline. During her palliative stage, Helen resided in her daughter’s family home where she was loved and attended by her family and homecare.

Helen was raised on her family’s farm near Yellow Creek.  Often, she would speak of her early years hauling water from the well, gardening, picking berries, cooking, canning, and milking cows. Despite the long cold walks in the winter, Helen recalled her school years and school friends with warm fondness. She considered becoming a teacher but opted to settle down and start a family instead.

In 1947, at the age of 17, Helen married Tony Lisitza, and they resided in Sheridan, Manitoba. In 1948, Helen gave birth to her first child, Greg.  Shortly thereafter, the young family relocated to Porcupine Plain, and in 1954, Miles was born. A few years later, the marriage dissolved, and Helen and her two sons moved to Prince Albert to be closer to Helen’s parents and siblings.

Helen supported herself and her sons by working at Woolworth’s as a bookkeeper. When Helen spoke of this period in Prince Albert, she said the days were long, and the money was short.  After divorcing Tony, Helen dated Ed Roberts for several years, and they became engaged.  After several wedding date postponements, the engagement was broken. Ed is fondly remembered by our family, and Greg stated that Ed had been like a father figure to him.

About 1965, at the age of 35, Helen met Ben Brawley, a traveling salesman whose territory spanned into Prince Albert. They both joined Jehovah’s Witnesses and were married shortly thereafter, on June 21st, 1967. Ben, Helen, and Helen’s two sons (Greg and Miles) rented a small home on the East side of Saskatoon. A few years later, about the time that Greg met and married Gail, Ben and Helen purchased a newer home on Avenue Y on the West side of Saskatoon.  It had an unfenced yard and an unfinished basement. Ben finished the house and yard, and Helen kept them up in meticulous fashion. During these first few years in Saskatoon, Helen worked at SaskMutual as a bookkeeper.  In 1970, Shannon was born, and Ben legally adopted Miles as his son.  About the same time, Greg and Gail had two children of their own, Melissa and Clifford. Helen took great pride in her grandchildren, and they visited regularly, often spending the night.  Helen and family often travelled to Prince Albert to visit Helen’s family, and to Southern Saskatchewan to visit Ben’s family. When finances allowed, the family ventured further, and they visited California, Hawaii, and Toronto.  Miles had several additional vacation opportunities as he was able to attend Camp Easter Seals. A family business was started in the mid-70’s: BRAWLEY ENTERPRISES. Ben headed up sales, and Helen kept the books. For the duration of their time together, Ben and Helen had a difficult relationship, and they separated in 1988.  Ben kept the business, and Helen kept the family home.

Helen, Miles and Shannon remained in the family home together, until Shannon moved out in 1990. For many more years, Helen and Miles remained in the family home, and together they would bring in the groceries from the car, or carry the lawn fertilizer to the garden.  As the years slipped by, Helen made her garden a little smaller, and then a little smaller still. She focused more on her front lawn, which was immaculate. Miles would come to Prince Albert (and later to Lethbridge) to visit Shannon and Marco, which provided a vacation for him, and respite for Helen.  When Helen reached her mid-70’s she set-up agency respite care for Miles, and he would go to Elmwood Lodge for a weekend a month, and then later, he would go every 2nd weekend. In spring 2009, Miles came home from a respite weekend and he found Helen on the floor; she’d had a stroke. Helen went into a wheelchair and a care home.  Miles went to live with Shannon, Marco and Sheridan until he also needed a care home.  In 2012, Helen asked to be moved to a care home in Lethbridge so that she could be closer to her children.

Helen was an energetic and spiritual woman who dedicated her life to the care of her family and garden.  During her lifetime, Helen had three children, three grandchildren, four great grandchildren, and two great great grandchildren.  She was very proud of them all, and she cherished every visit.  Helen also loved animals and had many pets. Helen had several close friends that she dearly missed as they passed away, one-by-one.  She had a lifelong interest in medicine, and she owned three medical encyclopedias that she would read at length. When she was younger, she was an avid sewer. She would make clothes for her children, grandchildren, and an occasional outfit for the family pet. Helen loved having her family visit, and she hosted countless family dinners.  These were always delicious as Helen was a tasty cook and baker. While living in her care home, Helen had an opportunity to try her hand at painting which she seemed to enjoy quite a bit. Those who knew Helen well, knew her to be strong, stubborn, and resilient. During her post-stroke years, these traits served her very well, and they are the reason she recovered to the extent she did, and why she lived so long.

During her lifetime, Helen started out as a Catholic, and later became a Jehovah’s Witness. While living in care homes, Helen was often invited to hear sermons from the 7thDay Adventists which she enjoyed attending.  She was also visited regularly by the Mormons, and of course, by Jehovah’s Witnesses. She enjoyed all these visits, and she also enjoyed hearing the messages of love and encouragement from those who took the time to visit and share their time with her.  At times, Helen was very religious, at other times, less so.  But, she was always a spiritual woman with an enduring faith in God and in righteousness.

Helen prearranged her own memorial service, internment, and marker several years in advance. However, due to precautionary measures addressing the COVID-19 situation, her memorial service has been reorganized to comply with current regulations.  Her arrangements for both her internment and marker remain as she originally planned, and she will rest with her family at Prince Albert Memorial Gardens. A graveside service will be held on Tuesday, March 2nd, 2021.  Optional viewing at 12:30pm.  A simple service and interment will follow at 1pm. Arrangements entrusted to Cherished Memories Funeral Services and Crematory.