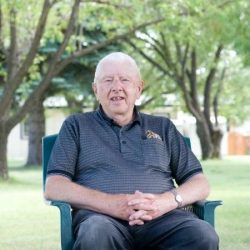 He attended Roseleaf school for his elementary years and then began working at a young age. He enjoyed playing ball and loved his momma’s cooking.

Henry worked hard in his life starting at Wells Construction during his teenage years, the Saskatchewan Wheat Pool (5 years), University of Saskatchewan (where he was proud to say he worked for $1.75/hr) and then the City of Saskatoon (21 years).

Henry was married to Kelly (Kathleen Gannon), on March 25th, 1978, until her passing in 2002. They enjoyed walking, reading and biking together in the Saskatoon river valley. He retired at age 60 from the City of Saskatoon.

Henry spent his last years in the Okanagan enjoying trails on his scooter, drives by the lake and walking in the sunshine.

Martens Warman Funeral Home is honoured to be entrusted with the care of Mr. Martens and his arrangements.

**For those who were unable to attend Henry’s service, Dale will be arranging a small celebration on May 20th, 2023, 1:00 p.m., at the Avalon Alliance Church, 413 Cascade Street, Saskatoon, SK.