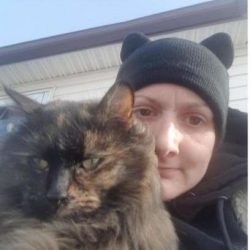 With heartfelt sadness we announce that Hollie Hazel Dawn Frost (Lafortune) AKA “HollieWould” was born March 16, 1985 in Rosetown, SK; passed away peacefully on May 13, 2022 at Royal University Hospital in Saskatoon.

Various friends, family and furbabies are left behind to remember me; as well as some to meet me at the Rainbow Bridge.

Good friends are like STARS, you don’t always see them, but you know they’re always there. Stars can’t shine without darkness and the ones above are the ones we’ve lost looking down on us. When you look up and see them, remember me; and bare me in mind. I was born to fly and I believe I lived authentically. The best kind of people are the ones that come into your life and make you see the sun where once you saw clouds, these are the people that believe in you and love you for you. Hold those people close and cherish them.  Let all the world say what they will, speak of me as you see fit. See you on the FLIP SIDE!!    – Hollie

In keeping with Hollie’s wishes, there will be no service held at this time. In lieu of flowers a trust fund for Holly’s son Raven Frost has been set up at the Maidstone Credit Union in her memory.