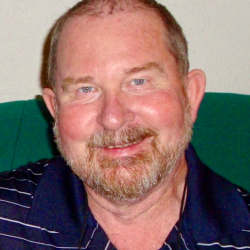 It is with great sadness that we announce the passing of Howard on March 31st, 2021 at the age of 72. Howard was born May 26th, 1948 and grew up in Hanley, SK. After high school he ventured off to Toronto for a 2 year electronic course. While in Toronto he married his high school sweet heart Lynett Row. After his schooling he returned to Saskatoon and worked at Sasktel for 30 years. After he retired he was a commissionaire for 9 years. In 2010 both Howard and Lynett retired and spent every summer at Cochin, Jackfish Lake and taking a few vacations. The cabin was where Howard wanted to be and never wanted to leave; his most favourite place ever.

Howard was predeceased by parents Alice and Leonard O’Dell, and parents-in-law Lawrence and Mildred Row. Also predeceased by brother Milton, sister Hazel, and her husband Joe, brother-in-law Arvid, sister-in-law Marlene and her husband Ernie, sister-in-law Corlyn Row, and brother-in-law Wayne. Howard has left behind many good friends and family. We will not be able to go to Mexico together again but we have many fond memories of our time together. Howard was such a quiet, loving and gentle soul.

A service will be held at a later date. In lieu of flowers, donations can be made in Howard’s memory to SK Abilities, Saskatoon.