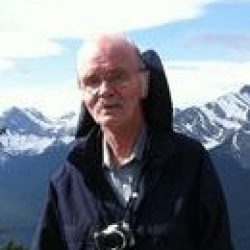 Ian was a professional artist, and worked with many mediums. His favourite medium of choice was acrylic on various canvases and was inspired from his work as a land surveyor in northern Canada, specifically Norman Wells, N.W.T. Ian also played the flute and was a children’s music teacher for some time, with his ex-wife and friend, Darlene (Frenette) Pearl. Ian was a very social and happy man who enjoyed sharing stories of his adventures with his old and very dear friend, Wilf Peters. Ian was honoured for saving a man’s life in a building on fire on October 3rd, 1982 from the residents of Mackenzie House, Norman Wells, N.W.T. On June 1st, 1971, Ian became a member of the Bahá’í Faith and dedicated himself to service with love for his community.

Ian was born in Watson, Saskatchewan, August 2nd, 1947 and grew up on a farm with his grandparents, near Vermillion, Alberta. He struggled but managed his mental health issues with a dignity and grace that was his signature beloved way of approaching life’s difficulties, including when he, in his later years, developed Parkinson’s Disease. Ian was a beautiful human being whose kindness, sweetness, and softness was only mirrored by his strength, grace and humility. He was a wonderful man, a loving father and a happy grandfather.