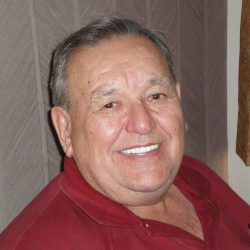 IRVIN JOHN PROCYK passed away on July 17, 2022 in Saskatoon Saskatchewan. He was born on June 21, 1942, in Fillmore Saskatchewan to Steve and Anne Procyk, the youngest of five children. He is survived by his loving wife Mady (Libau) Procyk; Daughter Faith (Dwight) Atteberry and their children Robert and Melissa (Joel) Wiebe; Son Paul (Pamela) and their son Ethan; Son Stephen; Sister Emily Piatt; Sisters-in-law Annette Procyk, Annette Libau, Ilona (Bob) Brandt; Brother-in-law Dave (Claudia) Boukes; Step-Father-in-law Ben Boukes and many nieces and nephews. He was predeceased by his parents Steve and Anne Procyk; Brother Stanley and sisters Julia and Tawny.

After graduating from High School in Regina and attending one year of University, he started his working career at the Glidden Paint Store in Regina. Irvin gave his heart to the Lord in 1966, and moved to Saskatoon in 1970. He then started working as a sales clerk at the then called “City Lumber Yard” where he gained knowledge and experience in the construction and building field.

In 1971 Irvin met the love of his life Mady Libau and they were married on October 10, 1971, at the Gruenthal Church. After a short period worked at the Canadian Tire Store, managing the Hardware Department, he decided to start his own business. First in Concrete Contracting then a few years in the Residential Home building, but then back again into Concrete Contracting starting the Company EAGLE ENTERPRISES LTD IN 1979 together with his wife looking after the Office and eventually joined by his youngest son Stephen. He worked right up until November of 2021 and was well known for being a hard worker in this heavy field of work and a good Christian businessman.

During the early 1970’s years Irvin was also involved in assisting the well known Christian Singers & Musicians “The Believers” with the recording of their Songs and Music at their Recording Studio in Saskatoon, which he so thoroughly enjoyed.

Irvin was a man with many talents and interest such as Woodworking, Furniture building, Oil Painting, Decorative Concrete, etc. but his greatest interest and desire was in pleasing His Lord and Savior Jesus Christ and believing the End time Message of this hour by the Prophet of Malachi 4.

He loved his family unconditionally and will be dearly missed.

He loved and appreciated his Christian brothers and sisters and would say to each and every one of them with a firm handshake “God bless you” and “Until we meet again”.

A funeral service to celebrate Irvin’s life will be held on Sunday, July 24th, 2022, at 3:00 p.m. at the Saskatoon Tabernacle, on 12 Highway, approximately 7 kms north of Martensville, SK. Interment to follow at the Saskatoon Tabernacle Cemetery. The church will be live streaming Irvin’s service, if you wish to join the family online, the website is: saskatoontabernacle.org  then click on Live Streaming Special Meetings.