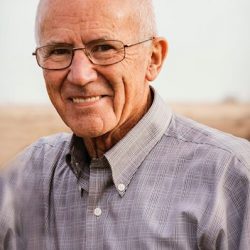 Isaac was born on October 31st 1947, to Henry and Elizabeth Wiebe at their home near Blumenheim, Sk.  He was the 4th oldest sibling of 13 children.  Isaac was a loving husband, dad, uncle, grandpa and friend to many.
On October 28th Isaac suddenly passed away and we know he is now rejoicing with our heavenly father and those that have gone before him.

Growing up on the farm Isaac learned a hard work ethic but also shared many happy memories with his siblings.   On June 2nd 1968, Isaac was baptized along with the love of his life, Betty, who he married shortly after on August 17th 1968.  Together they raised a family of four while dedicating their life to serving the Lord.

After Isaac and Betty were married, he finished upgrading his education and then moved to Moose Jaw, SK.  During that time Isaac attended Kelsey to earn his Electrical Journeyman red seal.   Isaac worked at Giesbrecht Electric when him and Betty moved back to Osler, until the passing of Isaac’s father.  They then decided to take over his parents’ farm and settle down to raise their growing their family.  They ran the dairy for a number of years until Isaac started up Community Electric alongside Willie Unger. After leaving Community Electric, Isaac opened Valley Electric in 2001 which he ran from home, up until his passing.  Isaac and Betty moved to Warman after having lived on the acreage from January 1976 until August of 2020.

Besides work Isaac enjoyed the occasional vacation.  They usually planned the trip around visiting relatives that lived far away.  There were a few trips to Mexico with the family as well which he thoroughly enjoyed.  Isaac didn’t have too many hobbies but enjoyed fishing once in a while or just going for coffee with friends and family.

Isaac had a special skill set that is very hard to come by.  He seemed to always know how to fix something when no one else could.  Isaac kept saying he was going to retire soon but everyone that knew him, knew deep down as long as there was a service call to be done, rain or shine, he would keep working.

A man like Isaac does not come around everyday.  We were very fortunate to have him in our lives, he was a great role model to us all!

You may view the service online at https://youtu.be/ih8k_PDTNME