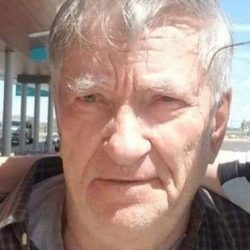 With heartfelt sadness we announce the passing of Ivan Collins at the age of 80 years on November 12th, 2021.

Dad was born Ivan Jacob Kowalenko on April 16, 1941, at St. Paul’s Hospital in Saskatoon, SK.  He was second of David & Mary (nee Walmer) Kowalenko’s five children and grew up on the family farm near Arelee, SK. Dad often spoke of his elementary school days at nearby Light School—many of his childhood friends being those he stayed in touch with all his life. After completing high school, Dad enrolled at the University of Saskatchewan during which time he changed his last name to Collins.

Rather than pursue post-secondary education, Dad took a crew job during construction of the Gardiner Dam. When that project completed, he purchased a farm at Sonningdale, SK.  Later in life, Dad commemorated his days operating heavy equipment (CAT) and farm equipment (International Harvester) with tattoos of the logos, one on each forearm.

Along the way, Dad met Mom (Eva Neufeld). They married in 1969.  For some reason, Dad never wanted a son.  He was certain boys would only break his machinery and make a mess of his tools.  As if by request, they had two daughters and he chose both our names—Gloria and Glenna.  Growing up on the farm, our family attended church in Sonningdale where Dad was a board member and taught the adult and teen Sunday School classes for many years.

Dad worked hard while we were young and wasn’t one for holidays.  But once grandkids arrived, he and Mom had no issue spending as many summer days as possible at the lake camping and fishing with us.  Dad was also an avid baseball and football fan, rarely missing a televised Blue Jays or Roughriders game.

Dad felt it was his duty to read anything and everything in precise detail, be it a vehicle’s operating manual, the leaflet included with medications, or just the powdered milk packaging or cereal box.  He had a keen interest in World War II history—Winston Churchill being a favourite author.  Most importantly, it would be a challenge to find anyone who has read the Bible cover-to-cover more times through than Dad.  He always read with a non-bleeding marker to highlight the passages he thought most important, and a straightedge ruler to ensure the highlighting was perfectly straight.

Dad was diagnosed with stage 4 cancer in January 2020 and on November 12, 2021, left to be forever with Jesus, Mom (Eva; d. 2014), his parents, and his sister Donna.  He will be remembered forever by his daughters and their families, Gloria (Monte), [Ivana (Scott), James, Gregory]; and Glenna (David), [Evangeline, Jacob, Estella]; his brothers Conrad (Helen), Bob, and Marvin (June), and many extended family and friends.

A private family memorial service will be held. Gifts and flowers are gratefully declined.  Instead, those who choose may honour Dad by making a donation to Bridges For Peace (www.bridgesforpeace.com), a ministry in support of Christian-Jewish relationships in Israel and around the world.