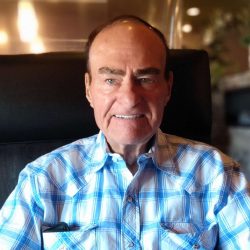 Jim was born on September 14th, 1939, in Limerick, Saskatchewan. He attended elementary school in Limerick, riding horse back from the Brown farm three miles north east of town. The Browns had a mixed farm operation of grain, beef, dairy and poultry. Animals, especially horses and dogs, were a big part of family life. Jim and his siblings learned to ride horses and would invite the Crossans and other neighbours over to join them in fun rodeos. Dad was a member of the Valor 4 H Club, Tux’s Older Boys Mock Parliament and taught Sunday school in Limerick.

Jim’s grandfather, Horace Brown, who immigrated from New Brunswick, played a pivotal role mentoring Jim. He instilled within him the value of hard work, honesty and respect for all. He died when Jim was 15, and that loss deeply affected him. Jim quit school after grade 10 and worked on the Knox farm and briefly on a ranch near Wood Mountain. He finished grade 11 in Assiniboia, and worked as a camp manager at Camp Woodboia. He appreciated the mentorship of Jack Knox, Adolph Reisner, and Reverend Don McPherson and decided to train for a year at Prairie Christian Training Centre in Fort Qu’appelle, Saskatchewan. He returned to work for the Knox’s, and provided summer relief for Reverend MacPherson by leading church services in Limerick, Meleval, and La Fleche. He met Marlene Sewell, from La Fleche, at a United Church gathering in Limerick. They enjoyed square dancing, shared common core values and quickly fell in love. In 1962 Jim completed grade 12 in Caronport, Saskatchewan, where he milked cows to help pay for room and board.
Despite bleeding ulcers and financial worries, Dad forged ahead, continuing with his desire to help youth. In 1963 he worked in Birtle, Manitoba as a sports director at a boarding school. In 1964 he took a job at Embury House in Regina, a shelter for neglected children. In June 1964, Jim married Marlene Joyce Sewell. They moved to Saskatoon where he worked at Kilburn Hall youth detention facility. Jim took on a youth case load while taking university night classes to finish his social work degree, and went on to work in adoption, intake, probation, and income security.

Jim loved the outdoors and enjoyed connecting with it by fishing, hunting and boating. He built a cabin at Blackstrap in the 1970’s, and enjoyed sitting around the campfire, reflecting, reading Louis L’amour novels, and playing games with family.

Jim was very active in his community. He sat on the board of St. Martins United Church and later at Calvary Church. He and Marlene helped serve the youth at Calvary. They baked cookies with the youth and delivered them to elderly who were confined, led crokinole tournaments, and put on Valentine’s dinner
banquets. Jim helped lead canoe trips with his daughters and construct the Alvin Buckwold school playground. He also helped lead Cub Scouts.
In 1981 he bought land southeast of Delisle and broke it with an old John Deer R tractor and cultivator. For Jim, returning to farming was a way of reconnecting with his roots and, despite its challenges, became an important source of spiritual healing for him. One of his favorite songs was “In the Garden”. When he was gardening or farming, the words “He walks with me and He talks with me” rang ever true.

Jim retired in 1996 from social services after 32 years of service, and hobby farmed for many years. He was never too busy to stop and chat with neighbours like the Zoerbs or Durhams to see how they were doing. He lived in Saskatoon but continued to help care for a garden at the farm within months of his passing. When he was too sick to get out of the van he would say: “Just open the gate, park the van so I can see, and put the water on the corn.”

Jim and Marlene were very active in square dancing. They helped spear head the Swinging Saints Club in Saskatoon, and later became involved with the Wilkinson Whirlers. In 2009 Jim and Marlene helped organize an International Square Dance event in Saskatoon. Through their involvement they made many close long-lasting friends.
Jim valued faith, family and farming. He loved his 3 children and 8 grandchildren dearly. His farewell remark to family was often “Take special care.” He looked forward to family dinner gatherings and watching them grow in strength and stature. He was proud of their various pursuits like riding, dancing, music and sports, and mustered all his strength to be there to watch and support them.

Jim’s protracted illness had a transforming effect on him and his family. Out of humility and gratefulness, he often remarked how thankful he was to have such a lovely family. In return, his family has experienced a sense of renewed thankfulness and commitment to honoring him through the values they impart to the next generation.
Jim was quite a guy. His grit, warmth, and enduring optimism in the face of insurmountable odds, serves as a powerful legacy to his wife, children, grandchildren, and all who knew him.

In lieu of flowers, donations may be made to 4H Saskatchewan, in memory of Jim.

Online donations can be made at https://www.4-h.sk.ca/donate.html
or by contacting
Shelby Longworth
(Development and Programming Manager)
E-mail: development@4-h.sk.ca
PH:(306) 933-6961