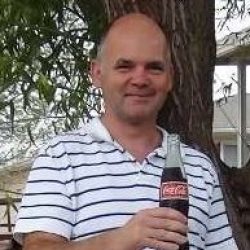 James Isaac Wiebe was born on January 20th, 1970, in Saskatoon, SK. After a brief time of living in Moose Jaw and Osler, the family moved to a farm situated near the river when James was 5 years old. Here is where he grew up in a loving Christian home. He attended Sunday School and church together with his family and was baptized on June 7th, 1992.

He attended school in Hague until Grade 11. The studies and learning style provided inside a classroom were not ideal for James. The important learning James craved and excelled at was on-the-job training alongside his dad doing electrical work. As time went on, many Valley Electric customers were thankful for the service calls James willingly came out to do. It wasn’t often James was in a hurry, so a Pepsi and a visit were seldom turned down after the repair was done.

James was a methodical thinker with a level of patience few others possess. When he had a plan or a formula in his head on how something should work electronically or battery operated, he didn’t give up until he gave it his absolute best shot, or in some cases, it shot back at him! He may have given his dear mom a few grey hairs over the years.

James grew up with brothers and cousins who were a bit rowdier than him. He wasn’t the instigator of pranks or stunts, but he sure enjoyed watching others perform them. James’ participation in these situations was usually behind the video camera. HIs movie credits consist of cat videos, battery and TV blowups and vehicles ditch hopping or going through sheds. It didn’t take much to get James laughing and those who knew him couldn’t help but laugh with him, it was contagious!

In the summer of 1986 James had the opportunity to go along with some of his Reddekopp cousins to Minnesota to visit the Duerksen cousins. This trip was a game changer for him and was the first of many more trips that he took to the US in the years to come. He made friends wherever he went and countless memories that he enjoyed sharing with family and friends back home. James also loved spending time on the river with his Sea-Doo, going for quad rides and sitting around a fire with a hotdog and a can of Pepsi. Although James had the best home-cooking available to him at home, he was known to have frequented McDonalds on a fairly regular basis, often meeting up with family or friends. He enjoyed spoiling his nieces with treats and gifts for no particular reason other than being a loving and caring uncle.

James enjoyed birthday parties, and likely none was as special to him as his last one when his friends planned a surprise party for him at the Neuanlage hall. A special thank-you to those who were involved in this, it meant a lot to him. James didn’t like a whole lot of change in his life, so when his parents moved to Warman in 2020 he wasn’t fond of it to say the least. But was glad to have the shop that he and his dad built at the river and the off-grid inventions that went along with it. He would proudly explain the solar heating system to anyone who would listen. The recent passing of his dad and brother was especially hard on him and it was at this time that the deterioration of his health became evident. James was not a complainer and likely suffered silently for some time before he could no longer hide his illness. He had a brief afternoon stay at RUH on March 16 before passing peacefully into the arms of Jesus.

James will be greatly missed by many and if there is something that we can learn from him, it is to take the time to listen to each other. James was seldom the one to leave a conversation first. He was caring, loved his mom, dad, and siblings immensely and most importantly, believed and accepted the Lord Jesus Christ as his personal Savior.

James is predeceased by his father Isaac Wiebe and his brother Cory Wiebe. He is survived by his loving mother Betty Wiebe; brother Steven (Cheryl) and his sister Tammy (Danny); nieces and nephews and many cousins, aunts, uncles and friends. Till we meet again James.

Those who are unable to attend may wish to view James’ service online by going to https://youtu.be/ybVIPD1aM3I