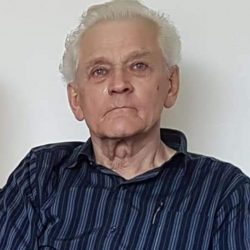 He was predeceased by his parents and sisters: Shirley, Mary, Doreen, and Vera.

Jerry spent the first 13 years of his life on the family farm, in Ravensworth, learning to milk cows, butcher chickens, weeding the gardening, and harnessing horses.

His family moved to Swan River in 1956, but Jerry went to live with Anne and Otto Albright to help with the chores on their farm.

When Jerry was 15, he made a profession of faith in Jesus Christ, as Lord and Saviour.  On April 12, 1959, he was baptized by Pastor Donald Powell and joined the First Baptist Church in Swan River.

His desire over the years was to live a life that pleased His Lord and brings honour to his saviour, who was willing to die for his sins on the cross.

In 1961, Jerry moved to Thompson, Manitoba and worked underground for the International Nickel Company.  After an accident that buried him up to his shoulders in rock, and then the death of his younger sister Shirley, he moved to Alberta to live with his sister Eileen and her husband Kent and worked in construction.

In 1964, he married Deanna Story.  They moved to Oshawa, then to Windsor, where he worked on the Chrysler assembly line.  He had an opportunity to get his high school diploma and complete a course in electronics.  Upon graduation, he took the train to Vancouver where he was hired by CP Rail as a radio technician.  He was employed by them for the next 31½ years.  CP Rail moved him and his family from Vancouver, to Kamloops, onto Revelstoke, and finally to Saskatoon in the fall of 1977.

Jerry loved his work and often said he had the best job in the world.  When he retired from CP Rail in 2000, he already had plans in his mind for his next career.  So he began buying old tractors, fixing them up and selling them.  We are not sure how many he recycled, but it was another job he thoroughly enjoyed.  As he travelled the highways and gravel roads around the Prairies, he found tractors as well as many great friends.

Over the years, his boys got married and blessed him with 15 grandchildren: 7 girls and 8 boys.  He always treasured his time with them.  They would come to the fall elk camp, to feed the Whiskey Jacks, make campfires, and wake up at 4:30AM to walk several miles to find that trophy elk.

On the afternoon of June 7, before leaving for the hospital, he had a visit with several of the Grandchildren and 2 little Great Grandchildren.  We didn’t know at the time that it would be their last visit, but Jerry was so glad to see them.

A memorial service will be held on Saturday June 26, 2021 at 1:00 p.m. at the Erindale Alliance Church in Saskatoon, SK with Interment to follow at the Floral Cemetery.

Arrangements have been entrusted to the Martens Warman Funeral Home.