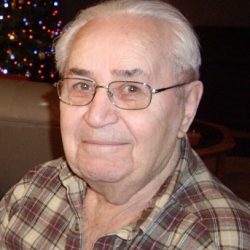 It is with heartfelt sadness that we announce the passing of John Giesbrechet at the age of 95 years, on January 24th, 2022.

John was the third of 11 children born to Anna and David Giesbrecht on September 18, 1926.

He did well in school, and we used to hear stories about how he skipped two grades because he found them too easy. Also, he loved vehicles and became the family driver at an early age. He always had an interest in tractors and enjoyed watching videos about them.

John also loved playing the guitar and still played when he was already in his nineties.

John was predeceased by his parents, 3 brothers (Abe, Jake & Dave), and 6 sisters (Helen, Annie, Mary, Tena, Louise & Agatha). He is survived by his brother Bill Giesbrecht.

He had so much love for all of them and will be greatly missed!