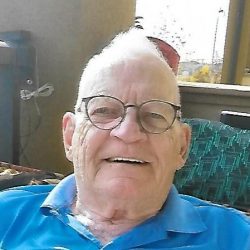 Jack was born at the Outpost Hospital in Carragana on 26 April 1934. He grew up on the family farm and attended school at Souchez (Somme), Carragana, Caronport and Battleford. He married his childhood sweetheart, Audrey Geddes, on 5 July 1956 and they moved to Lynn Lake, Manitoba where Jack started an electrical apprenticeship with the mine. After a couple of years (and a couple of sons) they moved to Saskatoon where he continued his apprenticeship with PCA potash. When the mine flooded Jack had to look for work and found his way to the Saskatoon Police Service which turned into a distinguished 29 year career. Along the way 2 more sons were born. He retired in 1988 and he and Audrey moved to Pebble Baye on Iroquois lake. They immersed themselves in the community and were very involved with Shell Lake Legion. He worked part time for the regional park at Memorial Lake and later as an investigator for Richardson Securities. In 2006, after dealing with many difficult health issues, Jack and Audrey moved to Warman where Audrey still resides.

Jack loved his family and friends. He made many close friends through work and the family had deep ties to all of the neighbourhoods they lived in (McPherson Ave, Maxwell Cres, Pebble Baye and Warman). He shared his passion for sports with his sons and was particularly fond of baseball and curling. The joke was he and Audrey were going for a baseball team but settled for a curling team instead. Jack also had close ties with extended family. He loved all his nieces, nephews and cousins and that love was returned in kind.

Jack is survived by wife Audrey, sons Mick (Carol), Keith (Andrea), Kelly (Julie) and Darren as well as numerous grandchildren and great grandchildren. The family would like to recognize the kind and compassionate folks at Spruce Manor who made Jack’s last days comfortable and dignified.

A virtual remembrance will be held at 3:00 on June 22. Please join us via http://www.livememorialservices.com/Home/ServiceDetail/14274.

Arrangements have been entrusted to Martens Warman Funeral Home.