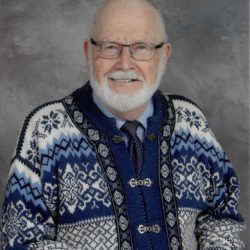 Millar, John B. (Jack) died Monday April 5, 2021 at the age of 91. He is survived by his four children, Kathleen (Barry) Sawatsky of Calgary, Virginia Millar of Vernon, B.C., Fred Millar of Saskatoon and John (Lee) Millar of Regina; six grandchildren, Andrew Sawatsky, Krista (Justin) Fenech, Lisa and Sarah Millette and Carter and McKenzie Millar and five great grandchildren, Dennis, Nora and Lucy Spencer and Elliet and Finley Fenech. Jack was married twice; to the children’s mother, Anne Halliday and then to Jean Nahachewsky.

Jack was born on June 6, 1929 in Empress, AB, the only child of John and Beatrice Millar. In his youth Jack lived in a number of small communities where his father worked for the C.P.R.. Jack graduated from high school in Rosemary, AB. He received his Bachelor’s and Master’s degrees from the University of Alberta and his Doctorate from the University of Wisconsin in 1960.

Jack worked for the Canadian Wildlife Service for thirty-two years as a wildlife biologist and, even after retirement, continued to do contract work based on his years of experience. He was a collector of many artifacts, which he accumulated in his 40 years of travel around the world. He was a keen photographer and for many years entertained audiences in local nursing homes, libraries, seniors groups and churches with his travel slides.

The United Church was a major focus in Jack’s life. He was the first lay-person to be President of the United Church Conference in Saskatchewan. He also served on many committees in the various courts of the church and was an active member of McClure United Church.

A memorial service to celebrate Jack’s life will be announced in the near future.

In lieu of flowers, donations may be made to McClure Place Foundation or a charity of the giver’s choice. Arrangements have been entrusted to Martens Warman Funeral Home.