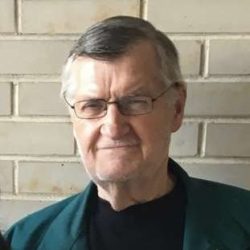 John Reid Henderson, 80, long-time resident of Prince Albert passed away unexpectedly on January 1, 2023.
John grew up in Prince Albert along side his brother Marvin and cousins Sharon and Wayne. He attended King George School and PACI.
John is remembered as a kind friend, a loving and caring father and grandfather, and an avid sports fan loyal to the Saskatchewan Roughriders, Prince Albert Raiders, and Toronto Blue Jays.
In his youth he played baseball and football and was a member the 1958 PACI Golden Bears football provincial champs enshrined in the P.A. Hall of Fame in 2012.
John ended is working years at SIGA in 2020 after 24 years of service. He enjoyed his years of employment at Northern Lights Casino in Prince Albert.
John always supported and encouraged his daughter Janelle. He often said Friday the 13th is supposedly an unlucky day, but for him it was the luckiest as it was the day he was given the gift of a daughter and the name Dad. They say great dads get promoted to Grandpa—John loved his new title! He enjoyed watching his grandchildren grow and supporting them in their achievements. He swelled with pride attending Rhodes’ football game at Mosaic Stadium and looked forward to all that 2023 has in store for Josie—adulthood, a trip to Europe, high school graduation, and university in the fall.
John enjoyed getting to know his son-in-law Jarod and his new extended family the Bellegardes from Regina. We celebrated and enjoyed Christmases, birthdays, and holiday dinners together.
In his final years, John enjoyed getting together with his friend Denis and the rest of the ChoirBoys for practise on Thursday nights. He looked forward to their meetups every week.
John is survived by his daughter Janelle (Jarod) and grandchildren Josie and Rhodes; his goddaughter Selina Mackie; his nephew Jim (Kathy Arnie) Henderson; niece Susan (Wade) Hamilton; and former spouse May Henderson.
He is predeceased by his parents Dan and Martha and his brother Marvin.
Service will be held in Prince Albert on Saturday, January 7, 2023 at 2 p.m. at 69 South Industrial Drive across for the casino (Métis Central WR 2A office). Memorial donations may be sent to P.A. Food Bank.