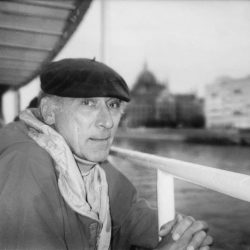 On Saturday, October 8th, 2022, Joseph Donald Fry died peacefully at his home in Saskatoon in his one-hundredth year. He had the care and love of his wife, Cathy.

Joe was born in Hungary on November 25th, 1922, and immigrated to Canada with his parents in 1926. After earning a degree in history and then theology at United College (University of Winnipeg), Joe completed his PhD in church history at New College in Edinburgh. Cathy and Joe were married in Winnipeg on October 23, 1952. On returning to Canada, Joe taught at United College in Winnipeg. In 1958, he accepted a position with the United Church of Canada in Flin Flon, Manitoba. The family would stay there six years.

In 1964, he and his family moved to Saskatoon, where he became a Professor in the History Department at the University of Saskatchewan. Joe and Cathy have always loved Saskatoon and have been an integral part of the cultural fabric of the city. Joe was known to walk to campus even after his retirement in summer and winter.  He said he did some of his best thinking on his walks. He wrote beautifully. Joe loved gardening, singing, and traveling, which included epic canoe trips. He is survived by his beloved wife Cathy of 70 years, his children David, Aaron, Elizabeth (Ahmad), and Kristen, and his grandchildren Shahrzad, Siena, and Declan. He was predeceased by his sisters Helen and Vi, and his infant son Paul Andrew. Joe was loved by all who knew him and will be remembered for his integrity, intellect, and compassion.

The family would like to thank the Seniors First team and the homecare workers. The arrangements are entrusted to Warman Martens Funeral Home. A celebration of life will take place at a later date. In lieu of flowers, donations to the Meewasin Valley Authority would be greatly appreciated.

How do you write about a Dad who has always been there,
Who has always been like a force of nature,
Who has been the steady rain a garden waits for,
Who has blessed us all,
Who has conquered all with his love,
Who has forgiven and who is forgiven,
Who has helped us walk on the path leading home.
Who has seen suffering before there was suffering,
Who has seen the world before it existed,
Who has taken us all to the place of prayers,
Who has walked a thousand miles in chains,
Who is blessed,
Who knew the truth before it was truth,
Who took my hand and cured my mind.

Martens Warman Funeral Home is both honoured and privileged to be entrusted with the care of Mr. Fry and his arrangements.